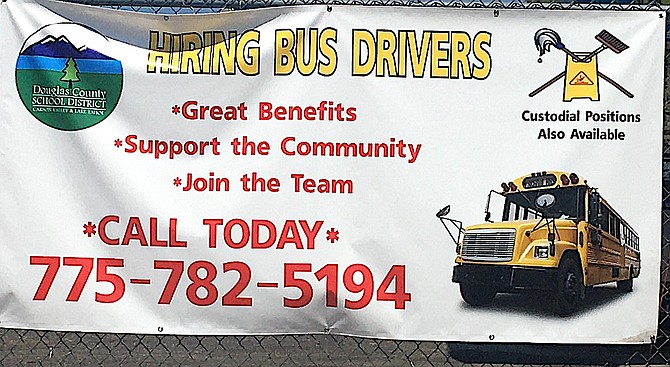 A yellow banner at Carson Valley Middle School is advertising for bus drivers.

With big yellow banners up at many Carson Valley schools, it’s no secret that with three weeks left before buses start rolling that officials are scrambling to find drivers.

In an effort to catch up, the district is hosting a job fair noon to 4 p.m. Aug. 10 at Douglas High School.

“Our job fair is in response to this issue and we are looking for employees for food services positions, clerical positions, special education paraprofessionals, playground aides, bus drivers, and custodians,” he said.

Over the summer, the school district listed secondary teacher positions as critical, and started seeking retirees who were willing to return to work.

According to the district’s web site there are 14 elementary school and 15 high school teaching positions open.

While most of the elementary positions are in special education, the high school positions include five science and four math teachers. Douglas High School is also seeking automotive and agriculture teachers. There are 10 teaching positions open at the middle schools, with four at Pau-Wa-Lu and six at Carson Valley in Gardnerville.

The district is not the only employer struggling to find workers in the county.

Gardnerville reports having one of its two seasonal maintenance workers starting on Monday after giving up on hiring the other.

Signs are up on businesses across the Valley seeking to entice job applicants.

Douglas County posted a 3.9 percent unemployment rate in June, according to Nevada Department of Employment, Training and Rehabilitation figures release last week. That’s up from 3.4 percent in May, but down from last year’s 4.7 percent. The county’s labor force is down 944 workers from June 2021.