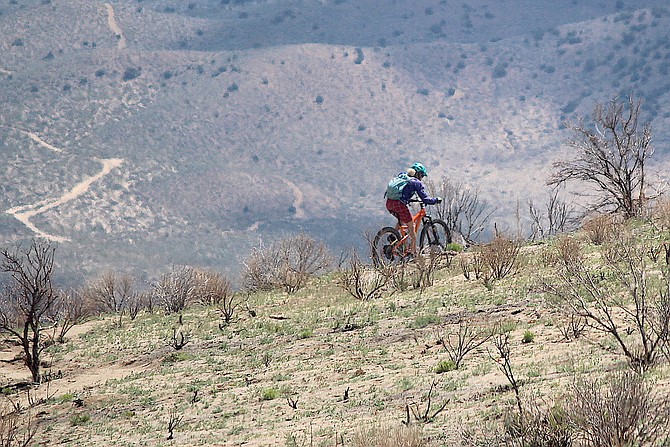 A mountain biker tackles the hill above Jacks Valley Road where some of the new trail is being built by the Carson Valley Trails Association.
Photo by Kurt Hildebrand.

Last weekend, members of the Carson Valley Trails Association conducted an Earth Day clean-up of the Genoa Vista Trail, hauling off a big bin of tumbleweeds.

“I was impressed by the hard work put in by local residents to help beautify our beloved recreation areas,” Association President Neal Falk said.

The trail is part of the more than 50 miles and counting of paths that wind through and around the Valley.

Starting out in 1994, the trails association has been active in construction of several trails in the county.

The group is also working on the eight-mile extension of the Clear Creek Trail south of Jacks Valley Road toward Alpine View.

Spokesman Jeremy Vlcan said that at one point during the winter, volunteers were blazing a mile of trail a week.

The association is holding its annual meeting 5:30 p.m. May 25 at the Carson Valley Community & Senior Center. For more information visit carson
valleytrails.org

Not all of Carson Valley’s trails are located along its mountain front.

Work is progressing north of Gardnerville and Minden on the Martin Slough Trail that has been in the works for most of the century.

Residents can sign up for updates on that project, which is expected to be finished in late summer.

County officials said they anticipate the 1.86-mile multimodal trail project will be done this summer, providing full bike and walking access to the Minden and Gardnerville downtown areas.

A dedication ceremony is proposed for Aug. 20, according to the Town of Gardnerville. Sunflower seeds were planted along the trail to give it a little color, according to Town Manager Erik Nilssen.

“Public trails are a great amenity for Douglas County,” said Economic Vitality Manager Lisa Granahan. “Approximately 30 percent of Douglas County residents are over 65 years in age and these types of at-grade, paved trails provide a significant enhancement for the public to continue to be active in the great outdoors. Working together in partnership with all our public and private partners truly allows Douglas County to make great strides … to capitalize on outdoor recreation and lifestyle opportunities.”

Work began on the $1.6 million trail in February after years pursuing right-of-way and studies to determine the effect the trail will have on parts of the slough.

The Martin Slough Trail has been in the planning stages since 2010.

On the other side of town, county officials are seeking $509,657 in American Rescue Act funds to conduct a feasibility study, purchase right of way and design a trail between the Gardnerville Ranchos and Lampe Park.

Estimated to cost around $6 million, work on the trail is complicated by having to cross the East Fork of the Carson River.

According to the county, the 10-foot paved trail would be nearly 10,000 feet long and would include a pedestrian bridge over the river, since Lutheran Bridge is barely wide enough for motor vehicles.

The Ranchos trail was listed as a top priority with the Nevada Department of Transportation in January and is a very high priority in the 2003 Douglas County Comprehensive Trails Plan, which is overdue for an update.

It has been nearly 20 years since the county last updated the 2003 plan, which would help the county’s eligibility for grant funding.