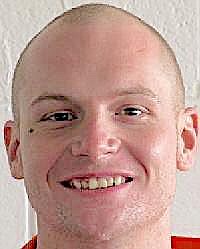 A Dayton man who led deputies on a midnight walking tour of Minden on Feb. 18 admitted to possession of 6.4 grams of methamphetamine on Monday.
Tyler Jacob Wutch, 28, received a suspended 19-48-month sentence. He was also sentenced to 10 days on a theft charge in East Fork Justice Court.
Because Wutch was on parole when he was arrested, he may face revocation in Lyon County.

Wutch also admitted a petit theft charge in connection with his arrest, which started out as a Walmart shoplifting case. His sentence in Douglas won’t start until that one for uttering a forged instrument is finished.

His sentence in Lyon County started in 2019, according to the Department of Corrections, and was due to expire in December. He was paroled in November 2020.

His probation status will be determined in Yerington.

Wutch was sentenced to prison in 2014 on two felony counts of uttering a forged instrument and one of burglary in Lyon County.

• A woman who was driving someone else’s vehicle was convicted of felony attempted possession of a stolen motor vehicle on Monday.

Andrea Elizabeth Gonder, 31, could have been sentenced on either a felony or a gross misdemeanor.

District Judge Tom Gregory said he weighed her prior felony conviction in deciding the harsher penalty.

She received a suspended 12-30-month sentence on condition she complete Western Nevada Regional Drug Court. She was given credit for 76 days time served and was released from custody on Monday.

• A woman who admitted to borrowing a vehicle and never bringing it back didn’t come back to court either.

A bench warrant for Alyson Mae O’Hara, 47, was expanded to the 11 Western states on Monday after O’Hara failed to appear for sentencing.

She admitted to a charge of attempted possession of a motor vehicle on March 7 where she was told the judge would decide whether it would be treated as a gross misdemeanor or felony. Her bail was set at $2,500 and she was released a few days later.

The Isuzu Axiom O’Hara admitted taking was stopped on Sept. 23, 2021. The driver, Willis Boyd Annis, is being held in Douglas County jail pending a psychiatric evaluation.

Annis was arrested after some items taken from the Walmart were found in the vehicle, along with a big historical sign that had been cut from near Caples Lake and a pound of marijuana.

• A no-bail bench warrant was issued for a woman whose sentence for failing to pay child support was deferred in 2017.

Lorene Lea Crawford, 47, was ordered to pay her back child support in 2017.

She failed to appear in district court on Monday for sentencing or respond to parole and probation for a presentence investigation.

Failure to pay child support is a felony and carries a 1-5 year prison sentence. Even if she goes to prison, she still owes the child support.

• A Gardnerville Ranchos woman was ordered to serve 60 days in jail as a condition of her probation for child endangerment.

Sara Rodriguez Tegerdal, 37, admitted to the gross misdemeanor charge and then failed to appear in court for sentencing.

She had a .27 blood alcohol and an unrestrained 4-year-old in her vehicle when she was involved in back-to-back collisions on Kimmerling Road on July 9, 2021. She was easy to trace because she left her bumper behind. She received 364 days in jail with 42 days time served, should her probation be revoked.

She must also participate in Western Nevada Regional Drug Court.