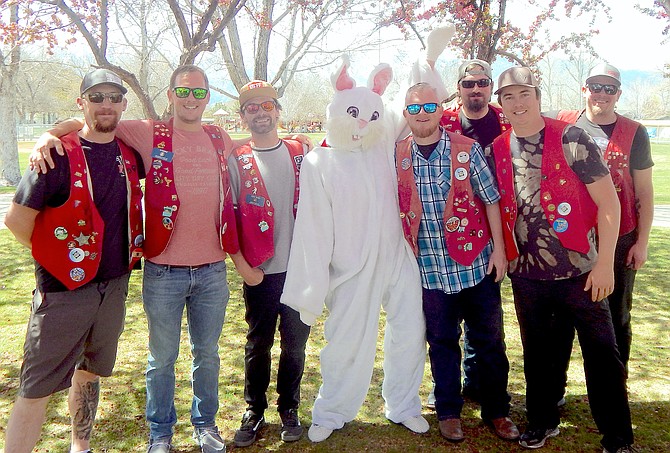 Thanks for Easter Egg Hunt

Many thanks to our local 20-30 Club for organizing the Easter Egg Hunt on April 17 at Lampe Park.

It was wonderful seeing so many children, various ages, running and enjoying the event and the much-welcomed beautiful weather.

The Easter bunny was a big hit with the youngsters. The Sheriff Department’s SWAT vehicle was also interesting.

Douglas County School District has gifted our family with robust educations, for two generations now. From Mr. Bell’s voice-inflected tours of Narnia each afternoon to my personal nemesis of The Climbing Rope during middle school P.E. to reluctant lessons on Shakespeare at Douglas High, I am grateful for the public education that I received in this county. Of course, things have changed. For what it is worth, floppy disks and big hair have given way to cell phones and seatbelts. What has not changed, however, is the education offered to students in Douglas County.

Despite the pressures and restrictions placed upon the county during COVID, our family recently celebrated one child’s graduation from Douglas High, while also watching another child maneuver her first year of high school. I admit my experience is anecdotal, but for the record, I have not observed any exclusion from my childrens’ educational process (as stated by Katherine Dickerson in her article on March 15).

In fact, as a conservative Christian parent, I was invited to serve on the last accreditation panel at Douglas High School and walked away from the experience deeply impressed with the teachers’ professionalism throughout the laborious, after-hours process.

Our family is very thankful for the Douglas County School Board, particularly as they keep the focus on educating children. Heather Jackson and Robbe Lehmann did an admirable job of this in their time on the School Board. A recent school board candidate’s accusation that they have done nothing in light of “ever more left-leaning education policies” runs counter to their record and their convictions. They have earned my vote in the upcoming general elections for another term.

Roberta Butterfield, running against two opponents in a primary election this May-June, has publicly stated that her focus, if elected, would be to overcome pandemic learning losses, oppose CRT, and directly involve parents in their childrens’ education, among other things. Both of her opponents seem to agree with these objectives. The only point of contrast that I could find in my research of these three school board candidates is that Roberta proposes a proactive, offensive plan instead of a fear-based, defensive posture.

I am so thankful that people in our community are willing to campaign and serve our students. Thank you to each of those community members who are running for school board. At this time, I endorse Heather Jackson, Roberta Butterfield, and Robbe Lehmann.

The district’s goal has always been to prepare our students to take the next step into the world. Some of our graduates stepped right into the work world and some went on to trade schools. Other students chose to enroll in a two year or four-year college program. Many continued their college career in graduate school, medical school, law school, and dental school. Still others went to the fire academy, police academy or into the military.

The point is all of these Douglas County students were ready for this next step.

Many of the students we’ve taught went on to serve our community and other communities as doctors, dentists, pharmacists, teachers, administrators, real estate agents, contractors, pastors, priests, firefighters, law enforcement, as well as small business owners. We have been so fortunate to teach and get to know the wonderful students and families here in the Carson Valley. Many of our Douglas High School graduates are people who have risen to leadership positions in our county.

So, as we head into an important school board election, I ask you to consider electing candidates who have a stake in this community. Elect people who have gone through our schools, have now or in the past had children in our schools, or at the very least, appreciate the exceptional path Douglas County Schools have always been on.

I urge you to vote for Robbe Lehmann, Heather Jackson, and Roberta Butterfield.

Vote for our children, their education, and their future.

What’s happening to our country? Have we lost all sense of what is important? What the “greatest generation” fought and died for? Is what we should be discussing Will Smith slapping Chris Rock or Critical Race Theory or Disney banning the phrase “girls and boys and ladies and gentleman?”

I don’t think so and I am angry about it.

Pictured are 102 faces of dead fentanyl overdose human beings. 102 of the 100,000 O.D. victims of this epidemic last year. Ages of those pictured ranged from 13-51 with the majority seeming to be in their 20s. Good looking, bright, in their prime and productive years, not the dregs of society. They looked like our next-door neighbor’s young adults. Arizona Rep. Paul Gosar states that fentanyl is the leading cause of death for people 18-45. 2 mg can kill an adult. 9,600,000 counterfeit pills were seized in 2021. Where is the outrage? Epoch Times, April 9, 2022, e-edition headline reads, “All States Are Now Border States By Virtue Of Smuggled Drugs”, Congresswoman Yvette Herrell (R-NM). She goes on to state fentanyl is made in China and transported via organized cartels through our southern borders. Unacceptable. Epoch Times, April 10, 2022, e-edition, headlines, “Texas Clogs Ports of Entry As State Forces Attention on Illegal Immigration”. Border Patrol Chief Raul Ortiz states, “In the past 6 months 1,000,000 illegal immigrants from 157 countries have been apprehended at the southern border.” I wonder how many were not apprehended? Organized cartels usher people and drugs across our open borders. Fentanyl is the preferred drug to smuggle. Fentanyl which is killing 100,000 annually and getting worse. We pledge our support in protecting Ukraine’s borders but not our own. What hypocrisy! Where is the outrage? Where are the protests, Letters to our Editors, and our local, State and Federal officials, our candidates and federal and state “leaders?” In August 2020 we gathered to stand up for our Sheriff Dan with an outpouring against BLM with flags flying and a message of “Not in Douglas County.” We were strong, united, and I believe we were a proud community.

I am ashamed to see what is happening to our country. I am 77 years young and the baton of righteous indignation must be passed on. I learned in my late 20s that if you don’t know what you will stand for, you won’t know what you will fall for. I am afraid people have lost their moral compass, their sense of right and wrong, and what is important for the survival of the greatest nation ever.