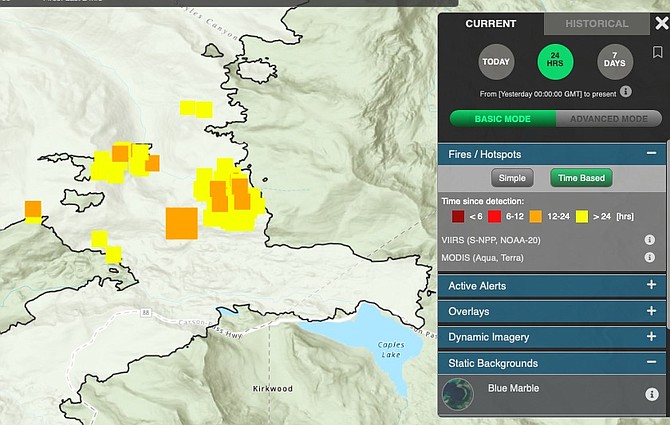 No new heat detection is displayed on this morning's Fire Information for Resource Management System mapping.

Fire mapping indicates crews working the Caldor did a good job of buttoning up the fire before a cold front swept through the region, bringing gusty winds and low humidity.

For the first time since the Caldor Fire began on Aug. 14, heat detection revealed no hot spots this morning.

The U.S. Forest Service’s active fire mapping program indicates a single heat detection deep within the perimeter of the fire northwest of Caples Lake over the six hours preceding 4 a.m. Tuesday. The heat mapping only shows larger hot spots as the fire continues to smolder in the Sierra. The right conditions could result in new active burning.

The fire that threatened South Lake Tahoe and prompted the first mandatory evacuation in Douglas County history remains pinned at 76 percent containment and 221,774 acres, according to the situation report issued Tuesday morning by the National Interagency Coordination Center.

Concerns the wind would carry embers over containment lines, while justified, don’t appear to have become reality.

Cameras surrounding the blaze showed very little activity on the fire this morning.

A red flag warning for the eastern Sierra slope and Western Nevada expired at 5 a.m. A new red flag warning has been issued for California’s Sacramento and Northern San Joaquin valleys 11 a.m. to 8 p.m. today as winds shift from southwest to northeast.