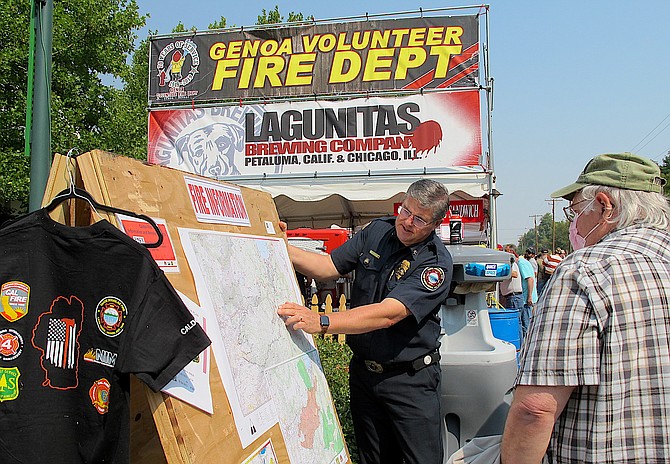 The fire information booth was located next to the Genoa Volunteer Fire Department where they were selling beer and Italian sausage sandwiches, which was guaranteed to draw an audience.
Photo by Kurt Hildebrand.

Genoa, Nev. — For the third time in just over a month, NV Energy has issued an public safety outage alert as a result of forecast critical fire danger. Neither of the previous two alerts resulted in an outage. The power company will likely make a decision 3-6 p.m. today. The outage would affect 600 customers between Genoa and Clear Creek and at Kingsbury.

With PG&E facing manslaughter charges in connection with the fatal Zogg fire that occurred last year, I expect NV Energy is going to take the public safety power outages very seriously. If the lights go out this afternoon, it will be 4 p.m. Tuesday before they come back on, so plan accordingly.

The wind’s already picking up this morning out of the southwest and will pose issues for firefighters working the Caldor Fire north of Caples Lake. The fire appeared to stay within its perimeter last night, but if ash can travel 20 miles, embers can certainly make it over the containment lines.

If the crowds were any indication, the return of Candy Dance was a big hit. I expect some activity in town as volunteers break down after the two-day event. Since the majority of the town’s revenue comes from craft booth rentals, that was already in the bank before the first crafter arrived.

A forecast cold snap looks like it might be sufficient to take out tomatoes and other sensitive vegetation on Wednesday morning with the low in Minden dropping to 30 degrees. That might not be true across the Valley, so your mileage may vary.

Today’s forecast calls for sunny skies and a high temperature near 79 degrees. The wind is expected to be out of the south at 5-10 mph, shifting to the southwest and picking up to 15-20 mph, gusting to 35 mph. The low tonight is anticipated to hit 38 degrees.