Firing operations attempt to head off spread of Caldor Fire 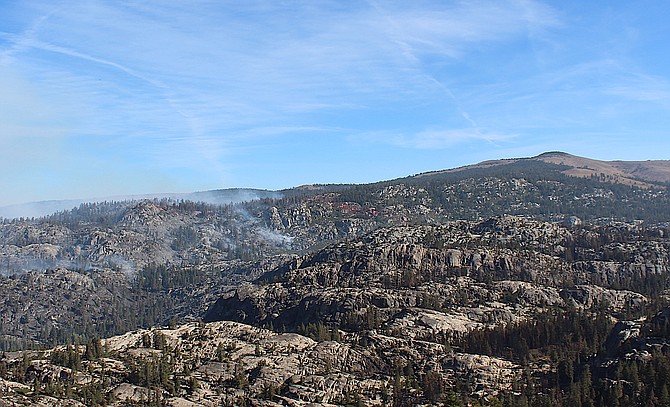 Smoke from fires north of Highway 88 off Carson Spur rises on Thursday morning.

Counter fires smoldered in the High Sierra below Carson Spur on Thursday as firefighters battled to stop the Caldor Fire from reaching the Sierra crest at Little Round Top.

Satellite heat mapping this morning shows the fire burning to within a half mile of the crest. Containment on the fire was delayed until Oct. 16, according to Friday morning's situation report as it grew to 221,161 acres.

Motorists stopped at the overlooks on Highway 88 to watch the smoke rise from the fire burning in the canyon below on Thursday.

Firefighters started the counter fires to open up a break along Schneider Camp 4x4 Trail to keep the uncontained portion of the fire from moving east toward Christmas Valley and Alpine County.

Firefighters worked through the night to douse hot spots along the trail.

A shift in the winds on Thursday helped keep the smoke out Carson Valley and aided in the firing operation.

“Hot dry weather persisted throughout the day, which drove additional flare-ups within the fire’s footprint,” fire officials reported on Thursday night. “Crews responded to several reports of smoke and heat, including one near Sierra at Tahoe Ski Area, which firefighters quickly extinguished.”

The economic impact of the fire continues to be felt at Lake Tahoe where Tahoe Beach Club announced it had raised $40,000 from its residents to assist its staff, who were displaced by the evacuations.

“The Caldor Fire impacted our local economy, affecting our service workers, who are the true backbone of Lake Tahoe’s economy,” said Beach Club Chief Executive Officer Patrick Rhamey. “Through generous donations by members and the executive team, Tahoe Beach Club’s goal is to help our staff make it through this challenging time, providing support during this period of need.”