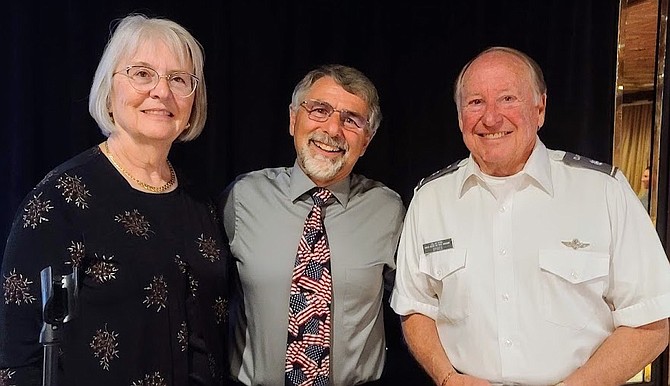 by Anita Kornhoff | Special to The R-C

On Sept. 12, the Sierra Nevada Republican Women hosted their 20th annual remembrance of the 9/11 terrorist attacks that destroyed the World Trade Center and damaged the Pentagon to a sold-out crowd at the Carson Valley Inn. The club has observed what is now known as Patriot Day continuously since the events that changed the world as we knew it in 2001. Each year they host either a luncheon or dinner to commemorate the solemn occasion. This time is set aside as a remembrance of those who were injured or lost their lives or those of loved ones. Various speakers have been featured at these meetings who share their personal experiences dealing with the trauma of the event or its aftermath.

On Aug. 26, one soldier, one Navy corpsman, and 11 Marines were killed as the result of an enemy attack while supporting a non-combatant evacuation operation in Kabul Airport, Afghanistan. In the center of the banquet room, that night was a table at which 13-places with folded flags, photos, names, branches of service, ages, and home towns in honor of each serviceman and woman lost in the recent terrorist bombing. Each of their names was read aloud by veterans from the Army, Navy, Marines, and Navy military support at the beginning of the program.

Nevada Civil Air Patrol (CAP) Lt. Col. Brad Spires spoke of his experience managing the developing situation. It was a trio of CAP pilots who took to the skies on Sept. 12, 2001, on orders from New York Governor Pataki to photograph the smoldering World Trade Center from above. Spires related how two unarmed military jets were prepared to take down Flight #93. This turned out to be unnecessary when the passengers of #93 fought back, causing the plane to crash land rather than destroy the terrorists’ intended target. Spires outlined how the CAP has improved and expanded as a result of the tragic events of 20 years ago. They include offering a well-received pilot training program opportunity and increased interest and involvement in the CAP. He is impressed with the number of young people stepping forward, ready to help protect our country from future attacks.

The second speaker was Rich Lammay, senior pastor of the High Sierra Fellowship Church, who provided counseling at ground zero. Lammay shared first-hand stories of the survivors he met in New York during the months after the attack. Pastor Lamman provided a listening ear, a much-needed outlet for them, comfort, and prayer in those traumatic times.

The evening ended on a positive note with vows to “Never Forget” and to bond together in support of our wonderful country.