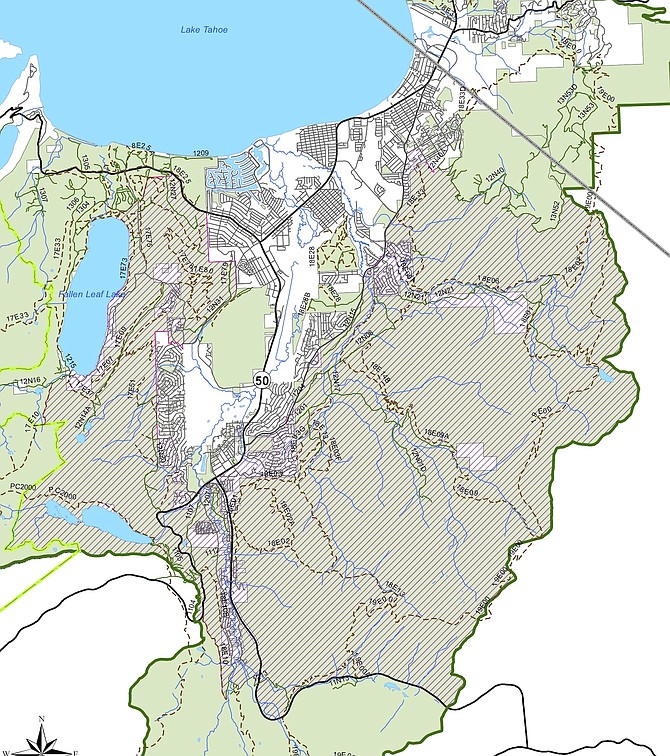 Crosshatched sections are closed due to the Caldor Fire

The anticipated order to close the Lake Tahoe back country affected by the Caldor Fire was issued on Saturday.

Saturday’s blustery weather does not appear to have contributed to the growth of the fire beyond its perimeter, according to fire detection maps updated at 6 p.m.

Portions of the blaze are under a fire weather watch today for gusty winds and low humidity.

“Strong winds will continue as a cold front approaches the area with increasing moisture,” fire officials said on Saturday. “The chance of showers will increase in the early morning hors Sunday as the front moves across the area. The front will move east of the area by late Sunday morning.”

They mopped up areas along the fire edge and patrolled to douse any fire within the perimeter where it threatens infrastructure.

Highway 50 and Mormon Emigrant Trail remain closed on Saturday as firefighters take out hazardous trees. The fire burned along around 27 miles of Highway 50, including crossing the highway in spots. As of Saturday night the fire has not expanded beyond its perimeter.