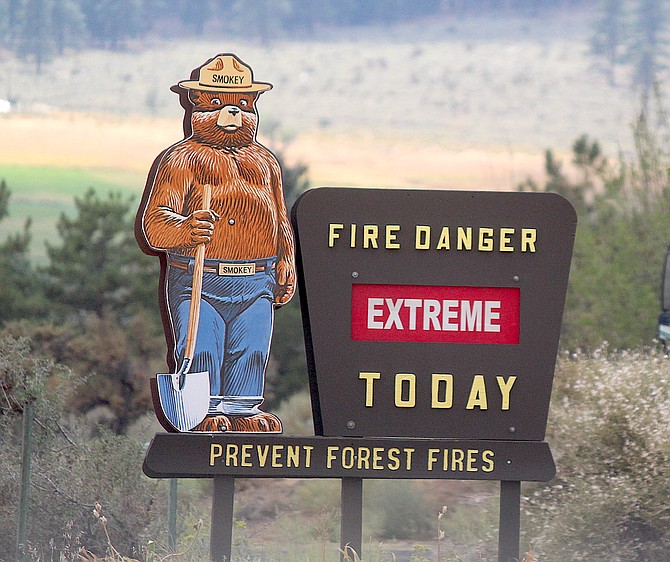 The fire danger sign at the Jacks Valley Fire Station isn't exaggerating when it says extreme. Just because the fires burning now are starting to slow down, doesn't mean the fire danger is over. It's not.
Photo by Kurt Hildebrand.

Genoa, Nev. — A revised $4.58 million budget for China Spring Youth Camp will end up down 10 percent from last year but is balanced with just $5,288 to spare. Douglas County commissioners are being asked to approve the budget and a revised position list for the next year.

Commissioners will read the new golf course maintenance ordinance into the record today, but it won’t be up for public discussion until its second reading. County commissioners meet 1 p.m. today at the historic Douglas County Courthouse in Minden.

Last night’s reopening of the more public portions of the Lake Tahoe Basin Management Unit doesn’t include the emergency closure of the Eldorado National Forest, which won’t open until the end of the month, at least.

Expect new emergency closures for parts of the forest affected by the Caldor Fire. The closing and opening of the forests is going to happen over the next few months as foresters work to recover from the fires. If you recreate in the outback, check before you go.

Satellite mapping shows a few heat locations within the Caldor Fire perimeter north of Strawberry Creek and near Lake Margaret northwest of Caples Lake. I was a little concerned about the wind on Wednesday afternoon, but it doesn’t seem to have caused any growth of the fire.

The fires have burned more than 2,100 square miles within 100 miles of Carson Valley this summer. Caldor Fire hit 71 percent containment last night, while the Dixie Fire is up to 86 percent.

The Main Street Gardnerville Third Thursday Wine Walk is 4:30-7:30 p.m. today. There’s one more of these in October before they shut down for the season. Tickets are available at Big Daddy’s Bikes and Brews and at Gardnerville Station.

Expect similar air quality conditions today as we had on Wednesday. Airnow.gov shows most of our smoke is coming from the fires burning near Sequoia National Park down south.

There are still plenty of fires pumping lots of smoke into the atmosphere all along the Sierra. Readings were at 48, or good, in the Gardnerville Ranchos this morning, but trending toward moderate.

The National Weather Service in Reno issued a fire weather watch for Saturday as a cold front arrives in Western Nevada, which could bring snow to the high Sierra. I wouldn’t be surprised if that watch becomes a red flag warning for critical fire danger later today or Friday.

The lows in Minden are forecast to come pretty close to freezing Sunday and Monday nights. With expected temperatures of 33-34 degrees, it’s not quite “unhook the hoses and say ta ta to the tomatoes” cold. But it might be somewhere among the microclimates in Carson Valley.

Expect haze all day today with a high temperature of 83 degrees and the wind picking up out of the west at 5 mph. Tonight the wind is forecast to be 5-15 mph.

So what was discussed at the Republican Town Hall at Hamdogs last night?