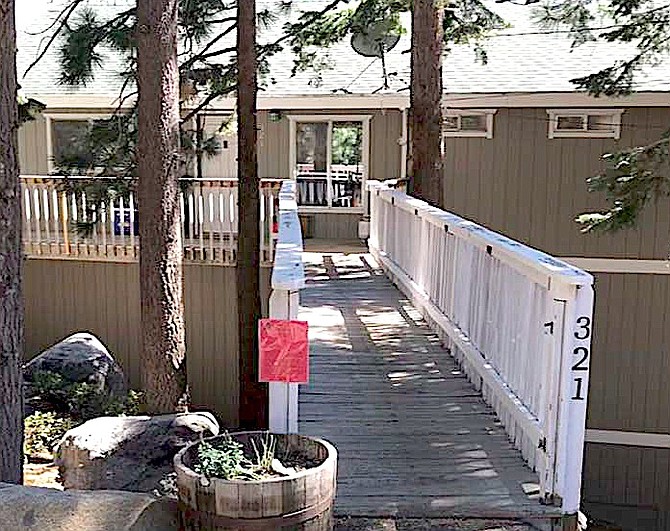 County commissioners are scheduled to hear an appeal of a fine for a vacation home rental that was rented without a permit today. Once a VHR advisory committee is appointed, appeals will go to that panel first.

Douglas County commissioners are scheduled today to discuss changes to the VHR ordinance they approved in June in an effort to address concerns expressed by a federal judge in a ruling before the ordinance took effect.

All five of the board members originally appointed in June have reapplied for a position on the board, including Keith Byer, Jeffrey Mains, Micki Hempler, Lauren Romain and Robert Drabant.

Commissioners could reappoint four of the original members but will have to replace one with an East Fork resident.

Changes being proposed at today’s second reading of the ordinance include removing language about using parking spaces to determine the maximum number of occupants. The new ordinance will require a 6-foot-wide lane for emergency access. A $20,000 penalty called for in the original ordinance will be clarified to say that the fine would be “up to $20,000.”

Portions of the ordinance were permitted to go forward including a lottery for the remaining permits up to the 600-unit cap. The make up of the advisory committee that required that a majority not be holders of vacation home rental permits was one of the issues raised by U.S. District Judge Robert C. Jones in a partial restraining order.

In a letter to the county, attorney Richard Campbell Jr. representing the Tahoe property owners who filed the federal suit, raised other issues, including occupancy, parking and multiple permits.

“I see no rational relation to not allowing an owner to have more than one permit,” Campbell wrote. “Since the county views VHR owners as engaged in a business, certainly the county would not limit ownership of other businesses to only one property.”

He suggested that multiple permit owners be grandfathered in.

Campbell also challenged the 600-unit cap, pointing out that the task force that helped the county develop the ordinance suggested 725.

As of the end of July, the county received 56 more permit applications than the cap allows. Only vacation home rentals with occupancies of five or more are subject to the cap.

“Increasing the number to 675 would accommodate the pending applications and would remove the possibility of additional litigation against the county for applicants that were first in line filing their applications,” Campbell said.

The ordinance partially went into effect on July 15. It was anticipated it would require amendment once the advisory committee began its work.

Nine Lake Tahoe property owners advanced that timeline when they filed their lawsuit on July 8.

An entire portion of the ordinance that deals with neighbors suing vacation rental owners was stricken in the revised ordinance.

Changes in the operation of the ordinance include suspending penalties pending appeal and specifying that decisions made by the VHR Board may be appealed to Douglas County commissioners.

Commissioners will also discuss appeal of a $5,000 fine for operating a rental without a permit today.

According to the report, the owner purchased the property in January unaware that a balcony had been red-tagged and that it didn’t pass a safety inspection. He rented it anyway and was cited.