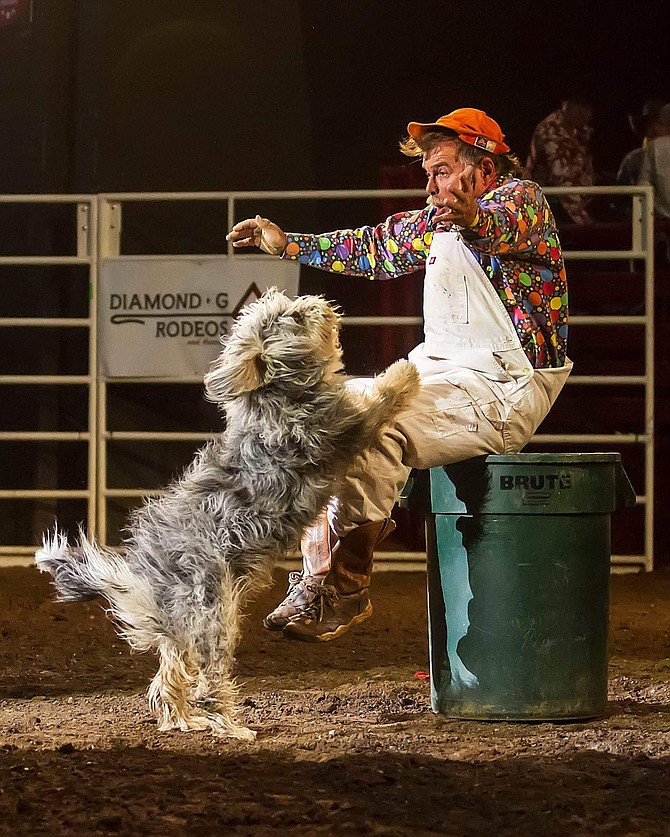 Coppertown Clown Bert Davis performs with one of his dogs. Photo by Andrea Kaus

His stage is a rodeo arena and his cast barks and howls. The Coppertown Clown also known as Bert Davis and dubbed the “Clown with the Dogs,” is bringing his whacky sense of humor and trained canines to the Douglas County Rodeo Saturday.

Davis said he has been working in the rodeo business since 1974, beginning his career at age 16 as the youngest bullfighter in the nation. That was the start of a noteworthy career that has brought a long list of awards and honors for Davis. He has been selected three times to perform as the feature act at the National Finals Rodeo in Las Vegas. Davis has been nominated for the PRCA Comedy of the year award several times and has been a PRCA Gold Card member since 1998.Davis and his dogs have been International Contract Acts Showcase Champions seven times and in 2012 they won every category they entered in the showcase, including Dress Act, Comedy Act and Clown Barrelman. They even performed in Americas’ Got Talent, said Davis.

While Davis is a courageous and hilarious performer, he says it is numerous dogs that truly endear him to the spectators.

“Those sidekicks, with their high energy antics make me, the Coppertown Clown, one of the best and most-traveled animal specialty acts in the industry,” said Davis.

They have gained international notoriety by performing in Six Provinces/Territory of Canada, 45 different States and in Australia, he said.

Davis and his wife train their 16 tail wagging performers themselves. Many of the dogs are rescues, strays and owner surrenders, said Davis.

“Throughout the years, we’ve trained and performed with over 30 dogs,” said Davis, “giving them a second chance at life.”

Davis said his quick wit, award winning comedy routines and ability to interact with a crowd offers up the promise of tear rolling laughter for his audiences.

“It comes from the heart,” said Davis. “Garth Brooks sings ‘it’s the roar of the Sunday crowd’ in Rodeo, but for me it is the roar of any crowd. The audience have been so supportive and so amazing because people just want to be with other people and see something spectacular.”