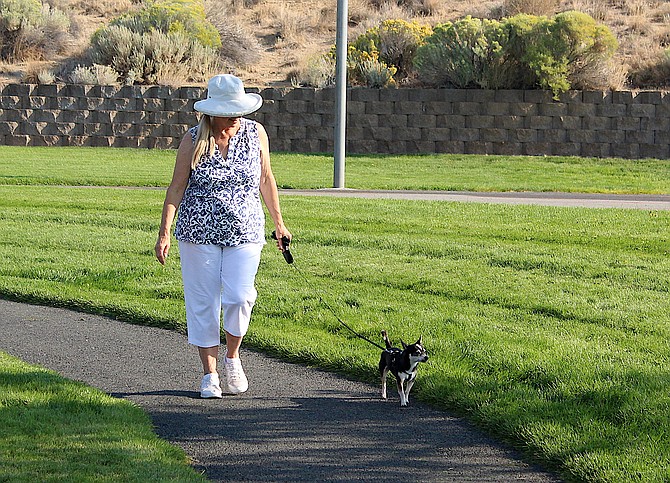 A dog walker enjoys the morning last week in the South Sunridge Park, which is dog friendly now, but could feature a dog park by next spring.
Photo by Kurt Hildebrand.

A proposal to install a new dog park at a location in South Sunridge received an endorsement from the Douglas County Parks and Recreation Advisory Board on Tuesday night.

South Sunridge is already a dog-friendly park, but dogs are required to be on a leash, according to Indian Hills General Improvement District General Manager John Lufrano.

Indian Hills has been working on the prospect of converting part of the park on Parkview Drive off of Mica Drive since before the pandemic as a way to reduce the amount of turf.

“We want to show that we are trying to be better stewards of water usage,” he said. “We have acres of turf area that serves very little recreation function. Our hope is to add more recreation elements in place of some turf.”

On Wednesday morning, a Sunridge resident walking her dog in the park said she felt the grass was the best thing about the park.

Advisory board members were concerned that residents around the park were unaware of the changes, but the woman confirmed she got a notice of the potential change in her utility bill.

Lufrano said he was seeking $50,000 in residential construction tax money to build the dog park. Indian Hills will provide the labor.

The money is raised in the northern part of the county from a $1,000 per building permit fee. That money can only be used on neighborhood parks, and paid to build the South Sunridge Park, Community Services Director Scott Morgan said.

The recommendation from the parks and recreation panel is just one of many steps before any money is available to start work.

The county will include the request in the capital improvement program, which will be presented by Douglas County Commissioners next year. It would be spring 2022 before any changes are made to the park at the earliest.

There is already a dog park at James Lee Park in Indian Hills and one at Johnson Lane Park.

On Tuesday, Gardnerville Town Board members approved a contract for signs designating K9 Corral. The dog park is located across Grant Avenue from the Gardnerville WalMart.