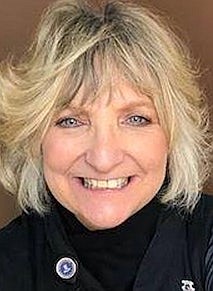 For 20 years Americans have remembered the victims, destruction, loss and the lasting consequences of the Sept. 11, 2001 terrorist attacks. Despite the shock and fear the attack left across the nation, miracles happened, too, said First Responder Chaplain Mindi Russell who was called to New York during the attack.

“Remember how we were attacked, how we came together and how we were made proud and loud again,” said Russell.

Russell is the executive director of the Law Enforcement Chaplaincy of Sacramento.

A chaplain’s responsibilities include informing people of a loved one’s passing, working with criminals and especially counseling community members and law enforcement officers and may be called to a critical, stressful or traumatic incident, like Russell was during the 9/11 terrorist attack.

Russell received the first phone call at six in the morning from Washington, D.C., that day.

“They said get on a plane and get out to New York,” said Russell. “Then the second plane hit and everything changed. This was not an accident.”

Chaos broke lose, said Russell and during that time, President Bush shut down all air travel.

She was able to catch a ride from Travis Air Force Base with a search and rescue team and arrived in New Jersey at a high security Air Force base at 2 a.m. the next day.

Russell said when she arrived, the East Coast was in a panic, but despite the destruction and confusion all around, it was truly amazing to see everyone coming together.

“In the mist of sorrow and pain there is much that can be seen and known of the people coming together to help,” said Russell. “I knew that I was helping people, one person at a time.”

Russell said she was assigned to Ground Zero, where the World Trade Centers collapsed. She walked the streets of New York with officers, assisting them in whatever they needed and helping people as they came across them. Russell said she had to tell 5,000 family members that their loved ones were gone and issued 40-50 death notifications a day.

“There’s a scripture that goes, ‘yea, though I walk through the valley of the shadow of death,’ that came alive that day,” said Russell. “As we were walking it became such scared ground because were walking on ash, and we knew that was the building and that was where the people inside those buildings were, our first responders and the families, so, it became very surreal.”

Even though four aircraft went down that day, and there was chaos, confusion, anger and loss all around, God was everywhere, and little miracles were happening, said Russell.

“He was in the people late for work that day, the diverted traffic and delayed flights, the heroes, first responders, everyone coming together,” she said.

Russell said she could see the miracles in the way the rain stopped on Ground Zero that day, in children’s handwritten letters thanking the first responders, prayers over lost and missing loved ones, when people were found, and in the response the country came together.

A 9/11 Remembering Ground Zero Memorial Ceremony will be 4-5 p.m. on Saturday at the Valley Christian Fellowship.

Russell lives with her husband in Gardnerville. She is the 2002 National Crime Victim Service Award recipient from George W. Bush and Attorney General John Ashcroft for her service at Ground Zero. She will share her personal stories of the 16 days she spent at Ground Zero in New York City during the ceremony.

For information and to RSVP to the ceremony visit www.eventbrite.com/e/911-remembering-ground-zero-memorial-ceremony-tickets-167902323369