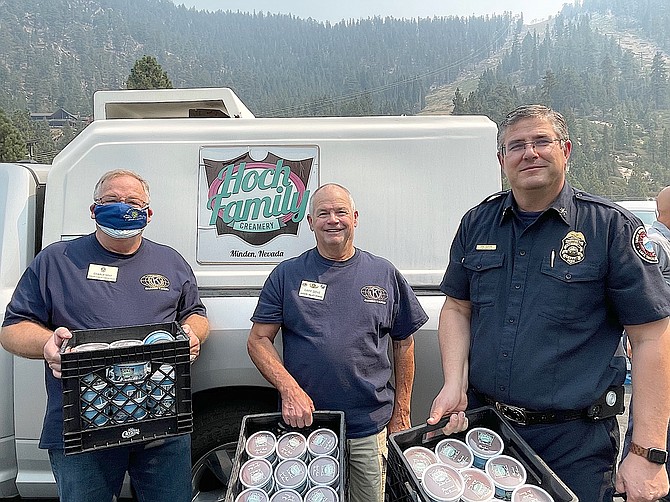 Who do you call when you have more than 31 gallons of ice cream you want to donate to first responders working on the Caldor Fire?

“Because all the roads to Lake Tahoe were closed, we reached out to Douglas County Sheriff Dan Coveley, asking how we could get the ice cream to the Lake on Saturday afternoon,” Dove said.

That was about an hour before the mandatory evacuations on the Nevada side were lifted on Saturday, which opened a window for the ice cream truck.

Dove and Charlie Holt went to the creamery picked up the ice cream and drove it to Lake Tahoe’s Hard Rock Casino, where the fire command post is located.

“We can’t thank Eric enough helping us get though the red tape of getting the first responders the ice cream,” Dove said. “We left 200 ½ pints for the for the command staff and fire crew staying at the hotel then Eric escorted us to the base camp at Heavenly Ski Resort where there’s 4000 plus personal working the fire.”

Dove said the men couldn’t hand out the ice cream to firefighters personally due to coronavirus restrictions, but they were able to leave the balance for them to enjoy.

“It’s a huge endeavor by everyone to save our Lake Tahoe region and surrounding areas,” he said.

The Hard Rock announced it opened on Tuesday night after a week, though it will still act as the incident command center and house and feed firefighters and emergency personnel.