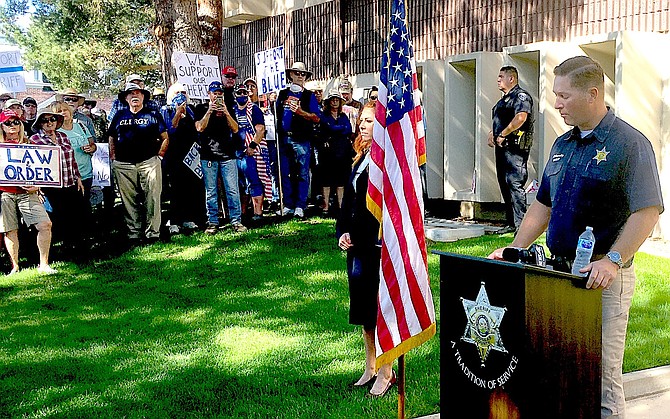 A grand jury called in response to the Aug. 8, 2020, protests in Minden found insufficient evidence to issue an indictment or presentment of any county official.

The report was unsealed on Thursday morning and a copy obtained by The Record-Courier.

The grand jury was called after Douglas County’s district judges received a petition from residents. Proceedings of the grand jury are conducted in secret.

A crowd of around 1,000 people gathered in Minden last summer in response to a #Black Lives Matter protest scheduled for the same day. The Record-Courier reported at the time that there were around 50 protesters and hundreds of counter protesters, many armed, in Minden that day.

The protest was sparked by a disagreement over whether the hashtag should be included in a diversity statement proposed for the Douglas County Public Library that prompted a public response from Sheriff Dan Coverley.

Both the proposed statement and Coverley’s response became national news and drew counter protesters from all over the West, many of whom were armed.

As The R-C reported at the time, no one was seriously injured or arrested, though there was a significant amount of yelling going on.

“Expressions of the 1st Amendment may be seen as offensive, but offensive is not illegal,” grand jurors said in the report. “Protests regarding such divisive subject matters can become passionate and raucous.”

According to the report, the sheriff’s office kept its plans to handle the protest confidential.

At least one undercover investigator was walking with Black Lives Matter protesters through Minden and testified in the only prosecution that resulted from the protest.

According to grand jurors’ observations testimony revealed that the sheriff’s office provided security for the library, mounted police outside recognized agencies and surveillance by deputies and the drone.

“Observed conduct during the protest amounted to a few isolated violations of the law, most of which could not be prosecuted because … perpetrators could not be identified or incidents were not reported by the victims,” the report said. “Dynamic events during a protest necessitate a judicious enforcement of laws, so as not to impeded upon freedom of speech or right to assemble.”

The Nevada Attorney General’s Office identified only two potential criminal violations in the crowd, one of which was prosecuted.

One man was convicted of a misdemeanor as a result of the protests.