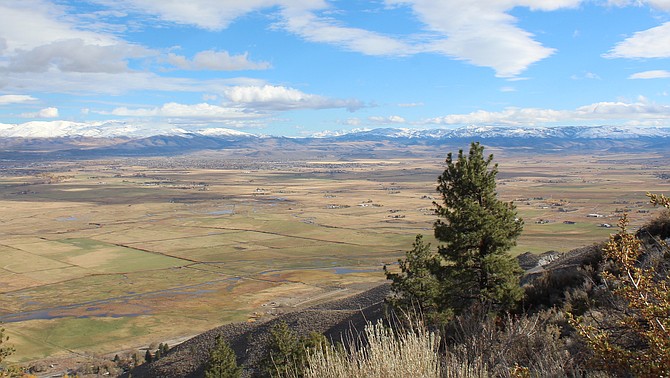 A view of Carson Valley from Kingsbury Grade at the 6,000 foot level.
Photo by Kurt Hildebrand.

Aside from the fact that Washoe County has a higher participation rate, and should therefore contribute accordingly, in China Springs, there might be a way to supplement their funding. If the Association of counties (without Clark) established a “go fund me” page, those understanding the value of the services provided could contribute. Each of the 16 counties participating could/should contribute, as well as hold fundraisers and promote the hell out of the page. The funds realized from the effort should then be invested in an annuity that would provide a percentage return on an annual basis. Sort of like the original Social Security fund was meant to be. Without Clark County, the rest of the state’s population is about one million. If ten percent of that gave $20, we’d have a $2,000,000 fund to invest. At just 4 percent return, it would add about $80,000 to the camp’s budget. With the 16 counties chipping in what they should, it could/should be far greater. Sorry to bother the established bureaucracies, just an idea.

Senator is part of the problem

I was so comforted to read Senator Masto is on top of what her Nevada constituents are now sadly facing everyday i.e. skyrocketing inflation, soaring gas prices, empty store shelves, a catastrophic invasion at our southern border (resulting in every town being a border town) failing schools, crime wave etc., etc.

Instead, Senator Masto is unbelievably focusing her attention on voting rights, women and families and jobs.

It is appalling how a supposedly intelligent woman, who I voted for Nevada attorney general, like the senator can be so unaware of these massive concerns hurting Nevadans. In my opinion she isn’t unaware, she is part of, and is in favor of the current regime deliberately destroying our country.

By the way does anyone really believe she and her cohorts wore masks during the dinner or just donned them for the theater of a virtue signaling photo op?

Is concrete facility right for Douglas?

Did you know that the Douglas Planning Commission on Oct. 12 approved rezoning approximately nine acres from light industrial to general industrial along with a special use permit for A&S Metals’ proposed enormous 26,200 square foot concrete crushing and recycling facility near the Minden-Tahoe Airport? This action still has not been approved by the Douglas Board of County Commissioners, which may reject or accept the rezoning as early as their meeting Nov. 4.

At first, rezoning from Light to General Industrial may not seem like a big deal. However, wasn’t it revealed during the Oct. 12 meeting that there are many LI parcels, but currently only five parcels in the entire county are zoned GI? One of them is for a propane distributor, for example. However, aren’t other operations allowed under GI with special use permits including those with noxious impacts, such as auto dismantlers, foundries, chemical and hazardous material facilities, batch plants, mining, quarries, as well as sand and gravel pits? Do you really want these operations in you beautiful rural Douglas County?

Further, isn’t A&S Metals (www.asmetals.com) also a California demolition contractor (California C21 Building Moving/Demolition Contractor’s License 761104) based in Castroville with eight California locations? Doesn’t concrete from demolition sites on older structures often contain dangerous amounts of extremely toxic asbestos? Doesn’t the A&S Metals website display photos of huge, open at the top, containers transported by big rigs from demolition sites, and presumably to and from the proposed 26,200 square foot recycling concrete crushing facility? How would you like to be traveling behind one of these open top container big rigs on 395 if it were filled to the brim with asbestos-laden crushed concrete? Even if there was a tarp, flapping in the wind, over the top of the container, do you think it would keep all of the asbestos from the demolition load out of your lungs?

How do you feel about allowing the construction and operation of this huge concrete crushing and grinding plant as well as metal recycling facility for a California demolition contractor? If this facility were to be built in California, wouldn’t strict environmental impact and wildlife impact studies be required prior to approval by authorities? Aren’t these restrictions missing in NV?

If this precedent of rezoning LI to GI is approved, can we expect additional noxious impacts on Douglas County’s quality of life from other California firms in the future?

The U.S. Senate has developed an attitude of superiority far exceeding that intended by its founding authority.

The Constitution specifies that each house of the Congress may determine the rules of its proceedings. It is unmistakable that the rules are for the Congress to accomplish their business in accordance with and as intended by the Constitution. It is not intended or should not be permitted for such rules to countermand, contradict, oppose, modify or prevent functions intended by the very document that created the Senate.

Filibuster is defined as the use of extreme tactics in an attempt to delay or prevent action especially in a legislative assembly. This tactic, as currently permitted by the Senate, allows a minority to prevent the Senate from exercising their constitutionally-mandated right to vote on matters.

Using parliamentary rules as applied by the Senate a vote cannot be taken until debate on the matter has been closed. The Senate’s “60 vote rule” is required to pass a motion to end debate, not to pass a measure. Therefore, through convoluted methods, by not permitting the closure of debate a minority can block a constitutionally-permitted vote from being taken, thus keeping the measure from being approved.

With an impudence disrespecting the intended operation of the Senate the minority will not declare debate ended yet no longer debates and at times even goes home.

There is a simple procedure nicknamed the “nuclear option” that can be invoked to contravene the “60 vote rule.” The Senate holds their rules so sacred they feel to challenge them takes a force comparable to a nuclear bomb, therefore “nuclear option.” They seem to place such a precedence on their rules higher than the very Constitution granting them the right to determine them that they have reluctantly used the option only twice.

The “nuclear option” is invoked when the Senate majority leader interrupts a proceeding by raising a point of order contravening the rule. Then by a simple majority vote the rule can be suspended. This was first used in November 2013 by Democratic Majority Leader Harry Reid and the second time in April 2017 by Republican Majority Leader Mitch McConnell. This simple procedure of the “nuclear option” might also completely abolish the Senate “60 vote rule.”

If the point of order should not be approved then the majority of the Senate is placing their rules above the authority of the Constitution itself.

In Federalist Paper No. 22 Alexander Hamilton warned: If a minority, turned away from what is right or good, can control the wishes of a majority the smaller number will overrule the greater number and the country shall be ruled by the minority.

Contrary to their arrogance, the Senate is not above the Constitution but subject to its judicial authority.

It’s the means not the ends

Joy Uhart’s Sept. 30 letter to the editor “Texas Confirms Reverence for Life” seems to believe what I wrote was an attack on anti-abortionists. Instead of addressing the issue of the means used to end abortion, she chose to deflect into an argument supporting the goal, lauding the Texas legislators as being the best they could be.

Pretending the means don't matter as long as the goal was achieved is a slippery slope. “The end justifies the means” is a formula to lose integrity, ideals and character. If the only means you can find for achieving an end to abortion are through coercion and harassment and you consider that to reflect the best that you can be, then you lack trust in the strength of your belief and you lack imagination. It stretches my imagination to wonder what the worst could be if you consider Texas legislation to be the best. However right one believes the goal to be, the means Texas legislators used to accomplish it are reprehensible. The means matter. They are the energy of what has been achieved.

Uhart also wrote that “When life begins is not a question of ‘spiritual belief.’” Something is there that wasn't before. “Unfortunately, tumors and cancer also fit the latter sentence. There is life, with a will to live, in cancer. Human life cannot be defined so narrowly. Humanity has conscience. It has soul. It has self awareness.”

When does tissue that divides and multiplies become something more than then potential of being a human being? It happens when you believe it does. The divine has created for us a universe of free will, gifting us with the power of choice as the means by which we shape our world.

Trying to simplify the issue of abortion with religious absolutes as if those absolutes are the ultimate of Truth is about control. Control is one of the ways we bring order out of chaos to make sense of what is a mystery. Controlling others is something different. It takes away free will. It takes away choice. When there is consensus around established rules that are controlling, we call them laws and choose to abide by them to bring order to society. There is no consensus around religious beliefs. We have no state religion. Our constitution protects us to follow the religious beliefs we choose. If you start forcing people to abide by a religious belief of only one group of people and use it to control the lives of others, that denies freedom of religion for all. This country has been inclusive of religions. What are you willing to destroy to get your way?

A Letter of Thanks to Kick off the Season of Gratitude

On behalf of the Block D Letterman’s Club and Douglas High School Athletics, we would like to express our extreme gratitude for the generous support from our community. On Sunday October 3rd Douglas High School Athletics & Block D hosted the annual Memorial Scholarship Dinner at TJ’s Corral at the Carson Valley Inn. The event was a huge success due in large part to our local community and businesses. The event served over 300 people and raised thousands of dollars for DHS athletics and the Block D Memorial Scholarship. We would like to specifically recognize and thank the Carson Valley Inn for donating all of the food, venue space and hours of work from its employees. The Carson Valley Inn has continually supported Douglas High School and Block D throughout the years and we are truly grateful for their generosity. In addition to CVI, Block D would also like to thank the multitude of businesses who donated raffle prizes. We are so grateful for your contributions which allowed us to continue this yearly tradition that honors those we’ve lost.