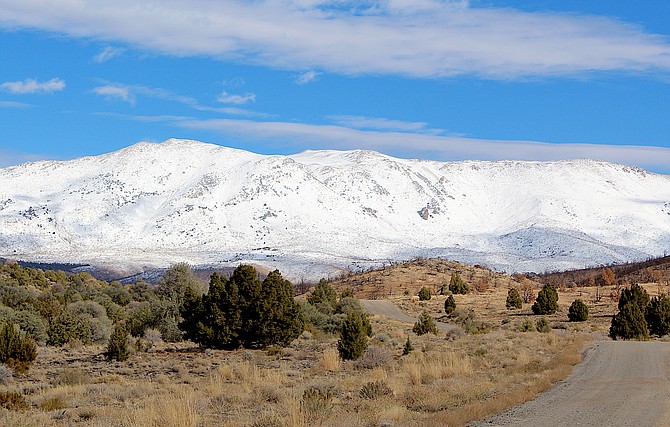 A nice coating of snow turned the Pine Nuts white on Monday.
Photo by Kurt Hildebrand.

Mother Nature rode into Western Nevada on an ichthyosaur-sized atmospheric river Sunday, leaving slightly more than 3 inches of moisture in her wake in Minden.

With the forecast for sunny and mostly clear skies for the rest of this week, which culminates in both Nevada Day and Halloween, we’re going to have to settle for it only being the second wettest October on record.

One of the spookier aspects of making too big a deal about the climate in Nevada is that it has a bad habit of changing just as you’re hammering a point home.

The four years since the 20-inch record year of 2017 have been drying steadily as the semi-constant drought returned. Having the mountains on fire for most of the summer didn’t help improve the picture in the least.

And then along comes one huge storm, and suddenly things look like maybe all the handwringing over climate change or the drought actually generated some precipitation.

We could argue that both the 3.49-inch record October 2010 or the now third-place October 2016 with 2.9 inches both preceded exceedingly wet water years.

While records have been kept in Minden for 115 years, that’s not really all that long. There are people alive today right here in Carson Valley who knew people who were alive then. Drop back another 42 years, and there’s a third group who were alive when Nevada became a state. Nevada as an entity isn’t any older than three moderately long-lived humans.

The barren flats that lie in many of Nevada’s basins amidst the ranges are testimony to a time when they were lake bottoms. Not that much further back, where snakes slither now, ichthyosaurs once swam.

We are celebrating all these things this week by celebrating Nevada Day with not just a parade, but also a tribute to mining, a nod to the railroads, and the somewhat unlikely coincidence that Nevada was officially born on Halloween.

So, here’s to Mark Twain and Dan DeQuille; Hank Monk and Snowshoe Thompson; H.F. Dangberg and Lucky Bill Thorington; Henry Van Sickle and the Bad Man Sam Brown; and all the other past, present and future characters drawn to the smell of sagebrush and wide open spaces. Here’s to all of us who find something to admire about the Silver State’s rugged charms.