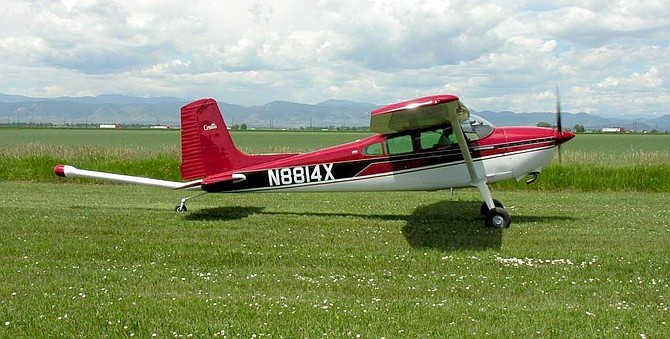 The aircraft that will be flying over Western Nevada over the next several months for the U.S. Geological Survey. EDCON-PR Photo

The U.S. Geological Survey is generally concerned with what’s going on beneath the ground.

On Thursday, Research Hydrologist Ramon Naranjo will talk to Douglas County commissioners about nitrates and their effects on Carson Valley’s aquifers.

Two major nitrate plumes are attributed to septic tanks in the communities of Johnson Lane and Ruhenstroth.

Further east, Survey scientists will be conducting low-flying flights over Western Nevada and Eastern California to map natural magnetic and radiation fields in an effort to determine what lies beneath the desert next week and continuing into the summer of 2022.

The airplane, operated under contract to the U.S. Geological Survey to study the geology of the Great Basin, will be making low-level flights over western and northern Nevada and part of eastern California. Anyone observing the low-flying plane should not be alarmed when they see it fly over or pass below the horizon.

This survey is designed to remotely study the western Great Basin as part of an ongoing USGS and Department of Interior program to better understand the geology, hydrology and natural resources of the region.

The aircraft will carry instruments that measure the earth’s naturally occurring magnetic field and natural radiation — data that will help geologists map, model and discern the rock layers at and below the surface.

The instrumentation aboard the aircraft is passive, meaning it receives but does not emit signals for detection, and poses no health concerns or risks to humans, pets or wildlife.

The survey will cover an area of approximately 20,000 square miles and include portions of Inyo and Mono Counties, Calif., and Churchill, Esmeralda, Eureka, Humboldt, Mineral, Lander, Lyon, Nye, Pershing, Storey and Washoe counties.

Flight elevations may vary from 120 to 200 meters above the ground as the aircraft attempts to maintain a constant flight height except when it encounters steep mountainous terrain. All survey flights will occur during visible daylight hours between 6 a.m. – 7 p.m.