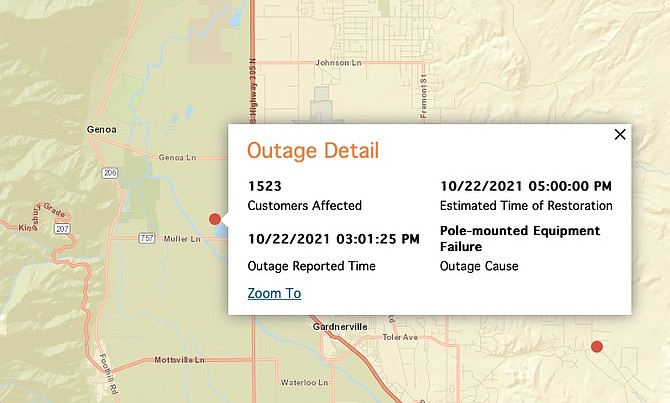 A screen shot of the NV Energy map showing a power outage in Carson Valley.

More than 1,500 homes and businesses were affected by an electrical outage on Friday afternoon after a power pole caught fire near the Genoa Cemetery.

According to NVEnergy.com, the outage occurred at 3:01 p.m. for 597 customers in the Genoa area code. There are two outages affecting 561 customers in Gardnerville. Power came back on for most NV Energy customers before 4 p.m., but it was out for Genoa residents in the immediate area of the fire until around 9 p.m.

According to the online map, the outage is also affecting 343 homes and businesses in the Gardnerville Ranchos.

East Fork firefighters responded to a pole fire along Jacks Valley Road near the cemetery at around 2:30 p.m. According to firefighters on scene the wire on the pole is expected to come down at any moment.

Jacks Valley Road was closed in downtown Genoa to just south of the entrance to Genoa Lakes while NVEnergy linemen repaired the damage. There was no report of injury or any danger to structures or wild land from the fire.

• On Saturday, East Fork firefighters responded to a report of a fire at Marshal's in the Carson Valley Center off Topsy Lane. Store workers reported the lights went out and a smell of smoke before evacuating the store at around 10 a.m. Firefighters traced the source of the smoke to the internal lighting circuit. Store representatives were told not to re-energize the circuit until they had an electrician check it out.