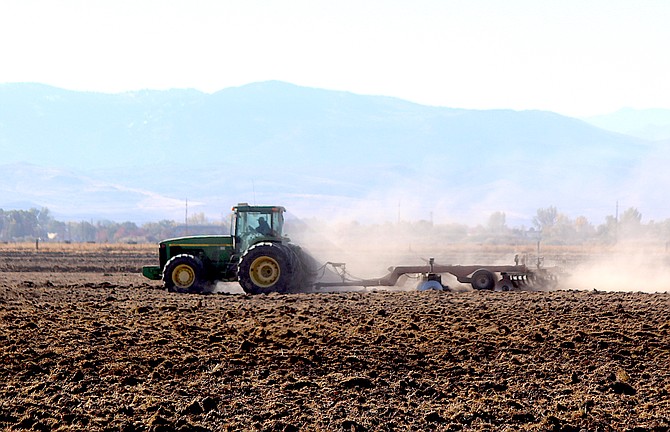 Workers have been tilling the field south of Genoa Lane near Highway 395. Typically, that's a precursor to planting garlic. Next step would be setting up the big sprinklers.

Genoa, Nev. — A town hall at Douglas High School on critical race theory was well attended on Thursday night. I think it’s exceedingly safe to say the vast majority of the folks who attended were against teaching it in the schools. In a letter to parents, Superintendent Keith Lewis said it isn’t part of the either the district or state curriculum, and he isn’t aware of any effort to change that.

An alleged firebug was arrested up near Topsy Lane around 5:45 p.m. Thursday after reportedly setting three fires and attempting to light a fourth. Douglas had one, the Washoe Tribe and another and Carson had a third, which likely led authorities to the culprit. I expect to hear more today.

This is the final weekend of the Carson City Community Theater’s production of Rex’s Exes. Shows are 7:30 p.m. tonight and Saturday and 2 p.m. Sunday at the CVIC Hall in Minden.

While the skies were relatively threatening, Thursday’s last wine walk of the season was pretty well attended. The Carson Valley Museum and Cultural Center is hosting the Sierra Nevada Invitational Art Show and Sale 10 a.m. to 3 p.m. Saturday and Sunday.

The first day of open burning on Saturday might actually see weather suitable to conduct a burn. But just because you’ve got a big pile and a match doesn’t mean you can fire it up. Go to eastforkfire.org and download the burn permit, and please follow the rules.

The Weather Service is putting odds on rain today between 8 a.m. and 2 p.m., but since the weather doesn’t have a watch or a map, your results may vary. Expect mostly cloudy skies and a high temperature of 59 degrees with the wind out of the south at 10 mph shifting west this afternoon.