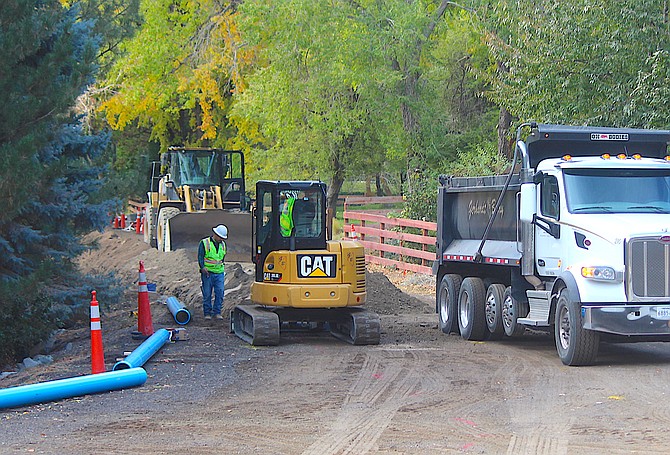 Workers trench along Genoa Street on Wednesday morning to install a pipeline.

Work has begun on a $330,000 pipeline replacement in Genoa designed to bypass a water bottleneck in Nevada’s oldest town.

Douglas County commissioners approved the project in August which will see the installation of nearly 1,700 feet of 8-inch line and fire hydrants.

The waterline work will follow Genoa Street from Carson to Nixon streets and then along Poplar Street to Fifth Street and connect at Jacks Valley Road.

Douglas County Public Works Director Phil Ritger said the new water main will help reduce a constriction that exists in downtown Genoa where the line drops down to 4 inches in places along Main Street.

Ritger reported in the Genoa Connections Newsletter that the best producing well in the West Valley water system is at Walley’s which can only feed the Sierra Shadows water storage tank above Carson Street.

“This new water main project will allow the water utility to increase the production capacity of the Walley’s well, increase the overall system capacity to (around) 2 million gallons total, and distribute water between the southern region and norther water storage tanks at Eagle Ridge, Genoa Lanes and Montaña.”

The line installation will permit town residents to be served from the norther storage tanks which will provide additional water during peak demand and will support additional fire hydrants should there be an emergency, like a fire.

One of the conditions placed on the 26-unit subdivision when it was approved in 1979 was that a water system proposed to serve it be turned over to the county.

In a Nov. 22, 1979, story appearing in The Record-Courier, Staff Writer Connie Brashear said it was the first water system the county would operate. It would take a decade before the county finally took over the water system in 1989, according to The R-C, which included the water tank built on federal land above Carson Street.