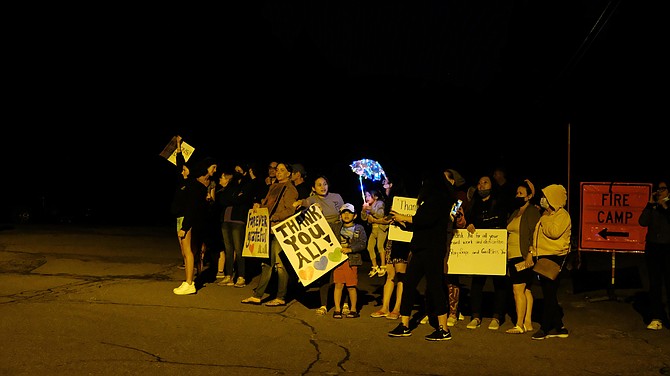 Tahoe Douglas Fire Protection District Battalion Chief Chris Lucas is a South Lake Tahoe resident who was fighting the Dixie Fire when he got a call from his wife at 2 a.m. letting him know his family was being evacuated.

Before the call, based on the information he had, it seemed the Caldor Fire wouldn’t make it anywhere near the Tahoe Basin.

“When my wife called me, it got very real,” Lucas said. “We arrived back [in South Lake] the next day. On one hand, it’s great to fight fire in your hometown because you know the area so well. And you know, it was literally my backyard where I grew up riding mountain bikes. So, I knew the trails and knew the terrain really well, which was a huge advantage, but all the consequences of the fire were so much more real.”

As of Tuesday morning, firefighters have a line around 98 percent of the Caldor Fire and expect full containment by Halloween. The fire prompted the evacuation of South Lake Tahoe at the end of August and the first mandatory evacuation in Douglas County history for Stateline.

Lucas said getting back into an already evacuated city only magnified the gravity of what could potentially happen to his hometown.

“It was surreal,” Lucas said. “It was like a ghost town. You could stand in the middle of U.S. Highway 50 on a busy intersection and hear birds on Labor Day weekend.”

At the time, over 5,000 personnel were working on the Caldor Fire, and many from Tahoe Douglas Fire and other local agencies, were part of the fight.

“Usually, you go somewhere else, you fight a fire, and when your time is up, you come back and enjoy your own backyard,” Lucas said. “But this time was a little different.”

North Lake Tahoe Fire Protection District Chief Ryan Sommers explained that while it is normal to fight an occasional small-scale fire close to home, there is a mutual aid system nationwide among fire districts that could take a firefighter from his hometown in Tahoe two states away to fight a fire in Oregon.

“We can go help other agencies fight fires,” Sommers said. “You hope that it’s never in your own yard, but when it is, such as the Caldor Fire, every agency that we’ve helped in the past knows it’s time for them to reciprocate and they come back and help us.”

True to the mutual aid system, firefighters from all over the Western United States made their way to El Dorado County to help save the Lake Tahoe Basin and its communities. And just as every firefighter has experienced when traveling for work, when they were done doing their jobs, they went home.

But many of the firefighters in the Tahoe region don’t get to leave the tragedy of the Caldor Fire, like Lucas and Sommers.

Normally after dealing with a town that’s been affected by a fire, the firefighters get to leave. South Lake firefighters like Sommers and Lucas are going to be here to witness a lot of the aftermath in a way they normally don’t

“You deal with those people everyday,” Sommers said. “We’ll be next to the people that were impacted and we need to be home to help them through the entire process. Especially if they lost any kind of property or life. It’s up to the local fire departments to help them through that ordeal, whereas if we go on a mutual aid, we normally just go to that area, put out the fire and leave. We don’t see the aftermath.

“Here at the Caldor, we’re going to see the aftermath, and we’re going to be there to help these property owners and citizens through the entire process, and hopefully have a good outcome from a terrible experience,” he added.

Tahoe Douglas Fire Protection District Wildland Battalion Chief and Zephyr Crew Supervisor Matt Fogarty were on the Caldor scene for nearly 18 days, while his local crew did 24 days, and their main national wildfire crew did 28 days.

“We did quite a few extremely long shifts when it came into the Tahoe Basin,” Fogarty said. “Our crews were fully committed to do whatever it took to help suppress the fire.”

Fogarty, who’s traveled all the way to Alaska to fight a fire, said that fighting fires so close to home had a much deeper impact on him than when he traveled to protect other areas.

“The difference is the attachment to what you’re protecting,” Fogarty said. “It’s a little different when you travel a couple of days and you see what’s happened, people being displaced. You don’t have that emotional connection to them like when it’s in your backyard.”

Throughout the entire fight against the Caldor Fire, many of the firefighters were able to find comfort through the outpouring of gratitude from the South Lake Tahoe community.

“It feels great coming back from a shift on Caldor, coming up Ski Run, and seeing all of those people that were hanging out and showing us support as we were coming back to camp every night,” Fogarty said. “I’ve never seen that before in my career, and I’ve been doing this for 16 years. I’ve seen signs and a few people here and there, but nothing like that.”

Fogarty was referring to the large number of people who began to meet the fire crews returning from base lodge after working on the Caldor Fire. Daily, community members would show up at 6:30 p.m., and when the firefighters came in at 7 p.m., would cheer, say thanks, and hold up signs.

“That was special,” Fogarty said.

The support is needed now more than ever as fire seasons begin to drastically change all over the world.

Fogarty explained that after the fire came over Echo Summit, there was a change in mindset among many of the firefighters, who began to realize that a number of the natural barriers that once were assumed to slow down fire progress might not work anymore.

TDFPD Battalion Chief Brandon Brady fought against the Dixie, Tamarack, and Caldor fires before being sent up to Oregon with fellow North Shore Chief Sommers and hasn’t had much time to stop and think about the new reality set before him. One where there is no such thing as ‘fire seasons’ anymore, but rather a constant fire season, with a few breaks in between.

Brady and the rest of the crews on the fire worked on 24 hour on/ 24 hour off schedules, but even then it felt like there weren’t enough resources to stop working for even a second. In the times when he and his crew were able to bed down, they would be called only an hour or so later due to more spotting activity.

“So, we really ended up spending 60 hours awake fighting the fire,” Brady said.

In times when they could’ve rested, his team chose to stay in order to protect the basin and it’s communities home’s.

“There were no other resources at the time to replace us and we were going to keep fighting. In my opinion, local resources in the forest for two nights is what saved most of the homes in Christmas Valley.”

“Some of our folks had homes immediately threatened, and that really puts a whole new level on it,” Brady said.

To his knowledge, many departments have implemented a version of a mental health diffuser in order to help firefighters work through what they’ve gone through.

Lucas knew he wanted to be a firefighter from a young age; something his father felt a passion for, and naturally came to him. Now, as the landscape of fires changes drastically right before Lucas’ eyes, he wonders what the future of firefighters will look like.

For those who are considering joining the profession, he says to be ready for anything.

“Be open to change as you go through your career,” Lucas said. “The fire service isn’t the same as when I got in, and the fires we’re fighting obviously. And that’s going to continue to change.”

Along with being proactive when choosing the career of a firefighter, all the chiefs agree that the only way to protect the basin in the future is to continue to plan ahead and continue preventative measures such as prescribed burns.

But even with the changes of his job, Lucas wouldn’t trade it for anything.

“I genuinely enjoy what I get to do,” Lucas said “and it felt really good to be able to be in a position to be part of the solution. It helps take away that helpless feeling we all get when you’re watching your town burn down. When I was at the Dixie Fire and the Caldor Fire was coming into town, I felt helpless. But it felt good to come back and participate in the effort to make things better.”