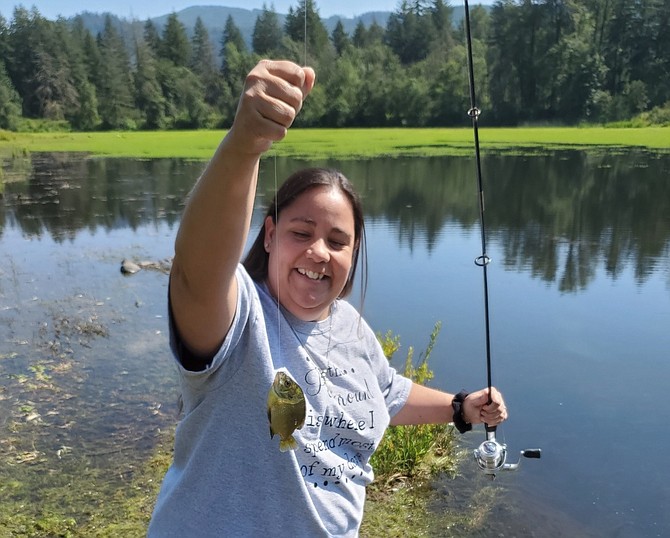 April Cannoy was a mom to hundreds of Carson Valley children over the years she worked at Under the Magic Pine Tree.

A celebration of life is scheduled for 1-3 p.m. Saturday at Lampe Park in Gardnerville for Cannoy, who died Oct. 2, 2021, in Scio, Ore.

A 1997 Douglas High School graduate, she went to work for the Gardnerville childcare center right after she got her diploma.

“I hired April right out of high school,” former director CJ Lake-Johnson said. “I just knew when I interviewed her that she was something special. She started immediately. She was wonderful with the kids and everyone else, too.”

She was born April Dawn Ashley on April 3, 1979, to Donald Ashley and Lauri Soyland, at Barton Memorial Hospital in South Lake Tahoe.

“She took in several children, who were not biologically hers and raised then as her own,” Dunlap said. “She was very loving and caring. She was there for anyone anytime of the day or night. She would either sit on the phone with them for hours or go to their home.”

Cannoy was the granddaughter of Gardnerville businessman Gene Ashley, who at one point taught school at Stewart before working for Harvey’s.

The Ashley clan moved to Gardnerville around 1989 and April attended school at Meneley and Carson Valley Middle School before graduating from Douglas High School.

April performed with the Douglas High acapella group while she was in high school.

“Everyone in that town knows her,” Dunlap said. “You couldn’t go to the grocery store or a restaurant without a hundred people coming up to her and hugging her and saying they missed her.”

Lake Johnson said Cannoy was a critical member of her team at Under the Magic Pine Tree.

“She was an amazing employee but an even more amazing friend,” Lake-Johnson said. “After 22 years as director of Under the Magic Pine Tree, I decided it was time for me to back out. With the new owners taking over, I told them that April was the best that they could get for my replacement. I was so pleased when they agreed. That was in 2004.”

Lake-Johnson said Cannoy kept in touch over the years, asking advice or sharing a story.

“April was a one of a kind, unique person who were were all blessed to know,” she said. “I cherish my memories of her.”

She lived in Nevada until June 2020, when the family moved to Scio, Ore., where Dan was raised.