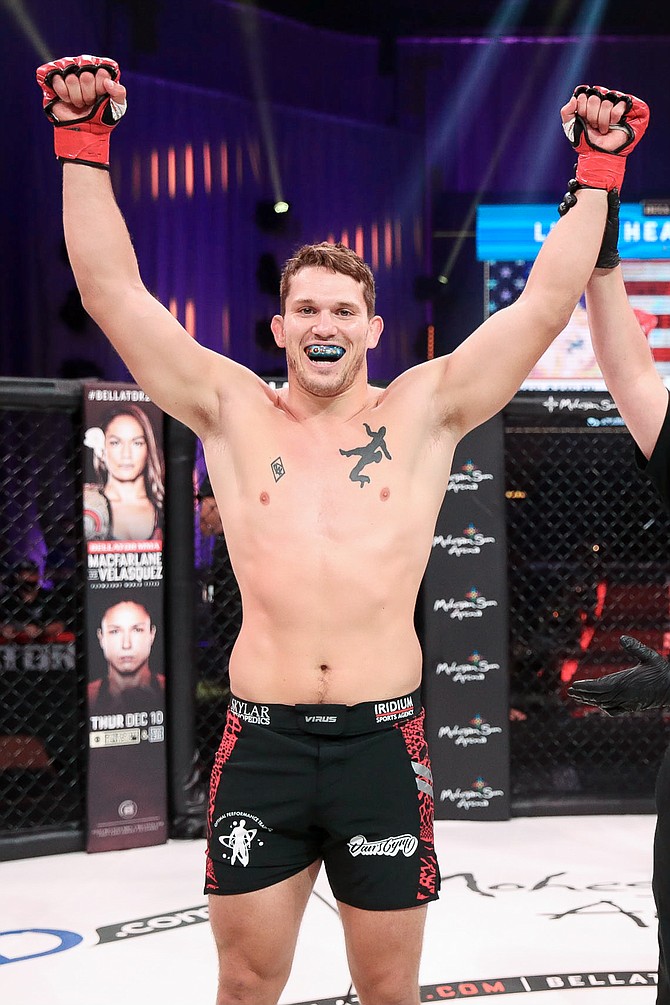 Douglas County native Sullivan Cauley raises his hands in victory after earning a knockout win at Bellator 253 in less than 30 seconds.

Sullivan Cauley will be antsy to get back in the cage next Saturday at Bellator 268.
The Douglas County native and Reno High School alumni cruised through his first professional fight in 28 seconds, knocking out his first opponent.
In his post-fight press conference, the 25-year-old light heavyweight said he was willing to get back in the game whenever he could.
About 11 months later, Cauley will finally get that chance.
“That was the biggest win of my career. I can’t believe it’s been 11 months,” said Cauley. “I had a couple opponents drop out, … I was set to fight for another show and I broke my hand sparring. Then I tore my labrum.”
The road back into competition has been a bit of a frustrating one for the up-and-coming talent, but he’s a week away from trying to make another splash in the professional mixed martial arts scene.
A chance he will get to take in his training home of Phoenix, Arizona.

How he found the fight game
His father first introduced Cauley to the sport at an early age.
Initially, a younger Cauley was awestruck by the idea, thinking it may have been a more high-flying role in the WWE realm.
“I showed up, obviously it wasn’t WWE, but I just never stopped,” said Cauley.
While at Reno High School, Cauley wrestled and played baseball with the Huskies.
While fielding some Div. II baseball offers, Cauley decided his PAC-12 wrestling offer at Arizona State was the right route for him.
“That was a rough transition, I had never been a year-round wrestler until I went to college,” said Cauley. “I definitely took some lumps, but I became a fulltime wrestler.”
Even before going to college, Cauley knew he wanted to pursue the fight game.
After leaving the Sun Devils’ program, that’s exactly what the Northern Nevada native did.
“From the time I decided I was going to wrestle in college I knew I was going to fight afterwards,” said Cauley.
The biggest challenge for the rising fighter had to start with the basics in other disciplines such as kickboxing and muy thai under coach Dan Brandt.
Cauley said it was Brandt’s push that led him down the road of his first amateur fight.
The rising mixed martial arts professional fought in about 20 amateur fights before getting his pro debut last year.
“One of the biggest things about learning to be a fighter is learning to control your bodies defense mechanisms,” said Cauley. “It’s felt like a long road, but I guess I’ve learned it quickly having only done it for three or four years.”
Cauley will get to share the card with his training partner and longtime friend, Ryan Bader, who is headlining the card.
Once he graduated college, Cauley knew he was going to go train with Bader in Phoenix, Arizona.
“They took me right in. He’s a similar style to mine,” said Cauley. “He’s a great mentor for me and he’s a big star here in Arizona. … I can’t wait for this fight to happen.” 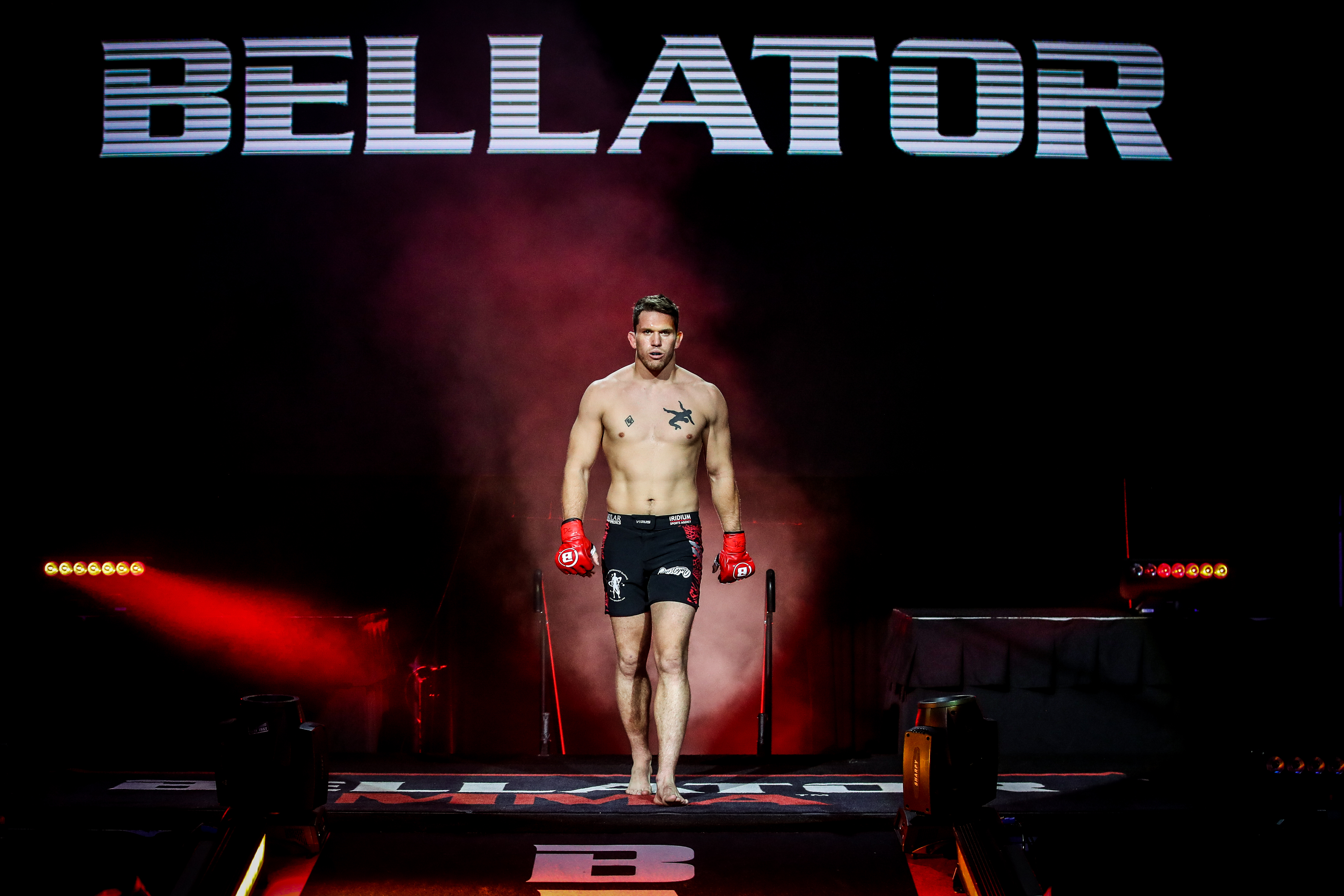 (Sullivan Cauley walks out for his professional debut in Bellaor MMA against Jason Markland.
Cauley knocked out Markland in 28 seconds. Courtesy Bellator MMA / Lucas Noonan)
Next weekend’s bout
As a wrestler, opening his professional debut with a 28 second knockout was certainly a quick way to draw eyes to his talent.
While the knockout may have faded from the mind’s of the dedicated fight fans, Cauley says he plans on putting on another dominant performance next Saturday against Deon Clash.
“I see myself cracking him,” said Cauley. “I think he’s kind of a weak striker. Not to sound too arrogant, but I think I can knock him out.”
The 25-year-old on the verge of taking on his second professional MMA bout says he doesn’t obsess over a game plan.
He will watch some tape to get an idea of what his opponent is good at, but then the focus turns inward.
Clash has a background in jiu-jitsu and finds his success by out-wrestling opponents.
“He’s not going to be able to out-wrestle me,” said Cauley. “I’m planning on stuffing takedowns and knocking him out. … If I get in there and need to take him down, I will.”
Cauley’s fight will be the second-to-last bout on the preliminary card before Bellator 268 switches over to Showtime.
The main card is set to start at 4 p.m.