Laxalt wraps up tour of state in Gardnerville, Virginia City 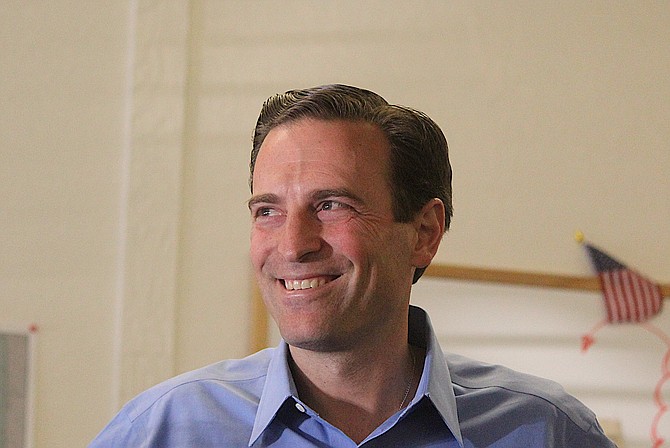 Laxalt, a Reno resident, urged residents to get out the vote, saying that having just one new Republican senator would change the entire dynamic.

“We still have the right to vote and have the ability to take back our institutions,” he said. “With our votes, we can take back the U.S. Senate. We have a role in saving the whole country with this race.”

Laxalt visited 17 counties in 10 days, according to his campaign, wrapping up in Gardnerville. He is running against sitting Sen. Catherine Cortez-Masto, a Democrat who was elected in 2016 to succeed long time Nevada Sen. Harry Reid.

Laxalt shook hands and chatted with those in attendance before being introduced by Assemblyman Jim Wheeler, R-Gardnerville. Wheeler plans to seek Sen. James Settelmeyer’s senate seat in the 2022 election. Laxalt served as attorney general 2014-2018 before being defeated for the governor’s seat in 2018.

Laxalt encouraged residents to push back against issues they see in their communities.

“We have to push back in our individual lives and communities,” he said. One of the best places can push back at your local level, quintessential American democracy, it’s been going on for hundreds and hundreds of years. People get in there and wrestle at the local level and they get to fight for what they believe in.”

Laxalt called out critical race theory and media coverage about Black Lives Matters and other issues.

“A bunch of parents decided not going to allow schools to indoctrinate our children with things like critical race theory,” he said, calling the framework racist. “It is fundamentally divisive. It turns our kids against each other and undermines faith in our entire system. It has no redeeming qualities. It must be met with pure objection.”

The Douglas County School District is hosting two town halls on the theory with one at Whittell High School on Wednesday and another at Douglas High School on Oct. 21.

Laxalt said the $3.5 trillion spending bill before Congress now is actually more like $5 trillion when you add the infrastructure bill.

“It’s the size of the New Deal or the Great Society,” he said.

The difference between the Great Society and the current measure is that there was a landslide election in 1964 that gave Democrats two-thirds majorities in both houses.

“There is no mandate for transformational legislation,” he said. “The spending is astronomical.”