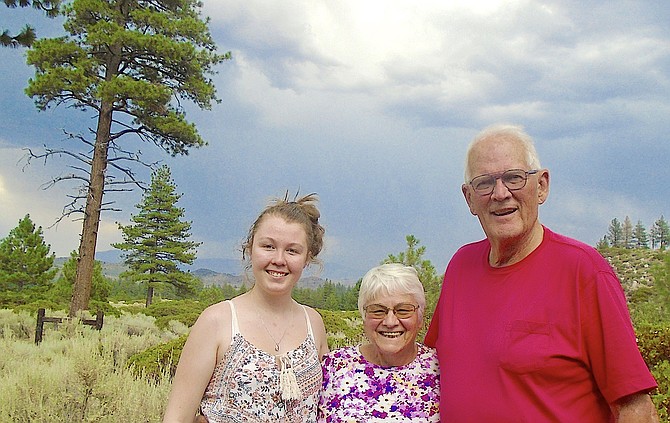 Morgana-le-Fae, Edie, and Skip Veatch with the view they have enjoyed for the last 43 years, rebuilding in the same spot after their home burned in the Acorn Fire.
Lisa Gavon | R-C Alpine Bureau

How did they fall in love? “He listened to what I was saying like it was really important,” said Edie Veatch about Skip, her husband of 52 years. No one calls him by his given name, Henry, and he towers above the petite 5-foot, 1-inch Edie by a full 16 inches. Both of them are “large and in charge” however, holding positions that have positively impacted our community in a huge way. They are Alpine County’s “Power Couple.”

Edie has always let Skip know how valued he is to her, and does not leave anything significant unsaid. “Skip is a man who wants to be needed, and I am needy!” she laughs. They still hold hands when they are walking together. They found the perfect fit.

Edie grew up in rural Yountville, Calif., on a farm with cows, pigs, and chickens. After attending Napa High, she moved to Sacramento, graduating from adult Education there. The couple met when they worked together at Household Finance in Vallejo.

Their first date was May 22 and Skip asked her to marry him a mere 4 days later. They both “just knew” and had a big wedding at Yountville Community Church 2 months from the day they became engaged.

Of course, they both got fired from their jobs since there were strict rules against “fraternizing.” They moved to Reno, then to Richmond, CA, both holding varied positions in the financial field during that time.

Skip was born in San Diego and grew up in the Bay Area. His Dad was in the Navy and that is how he got his nickname: from being called “Skipper.” His family had vacationed at Yosemite and also Markleeville. Skip loved going fishing and hunting with his father and grandfather. His ultimate goal was to settle in the mountains, and it is remarkable how seamlessly their life unfolded to put them just where they wanted to be.

There is currently no bank in all of Alpine County, but Skip and Edie got offered positions at our Markleeville branch of the Bank of America as a husband/wife team in 1973. Skip was manager and Edie was operations officer. The bank was located in todays Chamber building. Their lives were in sync both at work and at home.

They immediately jumped into the world of service in our rural community. Skip volunteered as a firefighter and EMT with the Woodfords Fire Department. He became part of the Historical Society, Native Sons, Fish & Game, and instructed Hunter Safety courses. He was on the Sheriff’s Posse and Sheriff’s Reserve.

Edie volunteered for Diamond Valley School’s Mother’s Club, and Alpine Children’s Center. She chaired the Juvenile Justice Commission. Both Skip and Edie have devoted endless hours putting together fundraisers for important local service groups, working tirelessly to make sure their projects were well supported financially. Skip was a musician in the Alpine Trio, the legendary local band that played for many of these events. Edie was in charge of Blood Drives for Alpine County for the last 40 years, with Skip running the BBQ for the last 25.

The bank kept managers at a branch for an average of three years. When it was time for them to leave, Edie worked at the Chamber of Commerce, as a cashier at Kirkwood, a waitress/cook at Molly’s Boardwalk, a clerk at the Markleeville General Store, and even sold Real Estate. She found her perfect place as Financial Officer, then Director of the Alpine Children’s Center. It was a place where she wore many hats: cooking, teaching, and coordinating whatever needed to be done. In 1998 she started the innovative organization that supports families as a whole: “Alpine Kids.”

Skip took the opportunity to go to the police academy, and began a new career as a deputy. It was a position that uniquely suited him. He spent five years as undersheriff, then was elected 3 times, becoming Sheriff of Alpine County for a total of 12 years. The department here has to be prepared to handle every possible type of incident. Skip reports that, “Even though we are small in population, we still have homicides, burglaries, armed robberies, domestic violence, car wrecks, and people who get lost and injured”. You have to be able to do it all.

From my perspective, the years that Skip was in charge were a special time in Alpine County. There was always a Deputy going by your house on patrol, and a real feeling that we residents were watched over and truly protected. Skip paid attention, cared about humanity, and worked hard for it. This is a trait that runs in the family. Skip learned a lot about the government here while he was Sheriff. In 2004, he was elected to the Board of Supervisors, serving two terms.

They adopted their oldest son Chris at the age of 4 in 1978. Their daughter Tammy Shannen was born 6 years later, and they adopted their granddaughter Morgana-le-Fae at the age of 2 in 2005. Edie’s mother, Thelma Burnside, lived with the family until her passing. Their home is warm, caring, and open. They have made a place that gives them the foundation to take care of not only their own brood, but the people in our community. They are inclusive.

Last week they sold their home of 43 years and are getting ready to move into Gardnerville. They rebuilt in the same spot after their house burned to the ground in the Acorn Fire. Skip has retired, and Edie is expanding the boundaries of Alpine Kids to include Douglas County residents, continuing the monthly outings that allow her program to have such high success in making families stronger. Both Skip and Edie see what needs to be done, and then go out and do it, no matter what the roadblocks. Skip and Edie created “an era of kindness” here in Alpine, and their influence will be greatly missed. We all wish them much success as they start this new chapter in their lives.