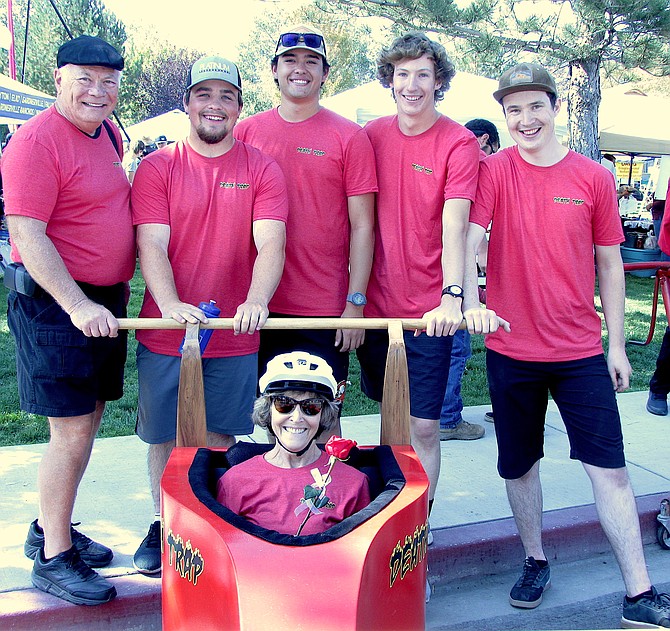 “We were so fortunate for the beautiful weather and outstanding community turnout,” said Program Director of Main Street Jen Nalder.

The East Fork Gallery which conducted the scarecrow making event for nearly 40 years reported 100 scarecrows were made and 150 faces painted during the festival.

“Every year the community participates with grandparents bringing their grandchildren and parents who participated as children bringing their own children,” said East Fork Gallery Director and Artist Janis Powell. “It is definitely a low tech multi-generational activity that puts smiles on the faces of all who join in the fun.”

Former Carson Valley resident Tanner Santonocito, who lives in Dayton, took her 3-year-old son to the scarecrow festival Saturday. The 2009 Douglas High School graduate remembers coming to the festival as a kid and was excited to carry on the tradition with her son.

The East Fork Gallery artists would like to thank the community for their support in making this autumn tradition a success for the gallery.

Not only did generations of locals carry on the tradition, but many out-of-towners created new ones, including visitors from Australia and South Lake Tahoe.

“Looking out at the crowd of smiling faces, families and people enjoying themselves is what this community is all about and we are very grateful to be a part of it,” said Nalder.

During Main Street’s Coffin Races, “Death Trap” by Steve Handelin and his team took the trophy. Nalder said it was a “photo finish” between them and the Ahern Coffin pushed by the “Cook Runnings” team. Crossfit Carson Valley was new to the race this year and put on a great show for the crowd. They even tasted some hay during a crash in their heat against the Freedom Fighters.

The Freedom Fighters took best coffin and Store All’s Black Betty and the ECV’s spinning coffin made their debut as crowd favorites.

Nalder said 40 vendors catered to the event and received a positive outcome and are excited to participate again next year.

“They were all so talented, it was incredible to watch,” said Nalder.

The Heritage Parks Garden even reported success with new donors and sales of their painted rocks.

“We are very thankful for the support not only from the amazing community, but also our sponsors; Sharkey’s casino, JT Basque Bar & Dining Room, Northwest Martial Arts, Simerson USA, Maxton Manufacturing and a generous donation from a Main Street Resident ‘giving angel,’ Sen. Settelmeyer for donating the hay and Carson Tahoe Hospital, the Town of Gardnerville for their support, not to mention all the volunteers who worked so hard to make this event possible,” said Nalder.

Main Street Gardnerville is a 501c3 non-profit. The organization sponsors and hosts many local events with a mission to preserve and promote the unique and historic identity of the community. For information and upcoming events visit www.mainstreetgardnerville.com

The East Fork Gallery is located at 1512 Highway 395 Suit 4 in Gardnerville. For information visit www.eastforkgallery.com.