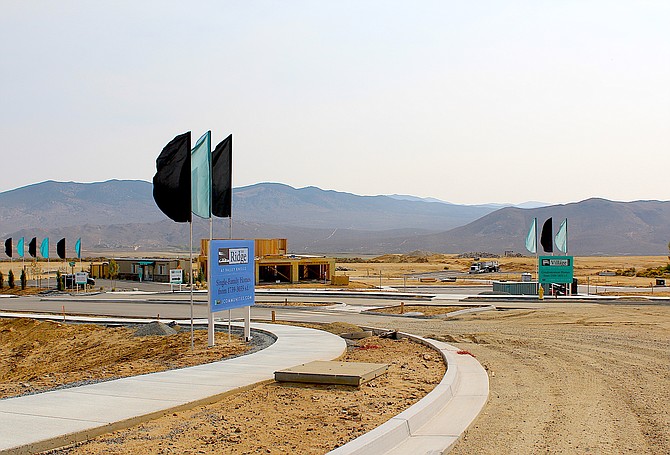 Work on Valley Knolls is underway north of Sunridge Drive near the Douglas County line.
Photo by Kurt Hildebrand.

Concerns about the drought and growth have prompted a call for a temporary suspension of building permits until a water study is completed.

Commissioner Walt Nowosad used his own water bill as an illustration to show how the future water needs in Carson Valley could grow.

“We can’t predict when or if the drought will end,” he said during a presentation at the Sept. 16 county commission meeting. “But we can predict how much water is drawn from the aquifer. We can take steps that our water won’t be overdrawn by unfettered growth.”

All of Western Nevada is in extreme drought, according to the U.S. Drought Monitor. Water flow on the East Fork of the Carson River entering Carson Valley during the water year that ended on Sept. 30 averaged 36 percent, down from 53 percent during the 2019-2020 water year. During the last water year, much less river water made it to Carson City, which saw a fifth of its average flow, down from just over half in the previous year.

Carson Valley has greater water resources than its neighbors, thanks in part to a large aquifer that has a perennial yield of around 49,000 acre feet. Water usage in average years runs 30,000-35,000 acre feet a year in the Valley, according to the Carson Water Subconservancy. About a third of that water is dedicated to agriculture and another third goes to the Valley’s water purveyors. During drought years, agricultural use goes up as water rights holders dip into supplemental rights to make up for a shortage of surface water.

All of Carson Valley’s drinking water comes from the aquifer, which sees some recharge from the river, but also is recharged by streams coming out of the Sierra and Pine Nuts, as well as irrigation.

While paper water rights in the Valley and across the rest of Nevada are overallocated, that rarely translates into overpumping of the actual water, which is illegal under state water law.

Water and growth are touchy subjects in Douglas County, and with a majority of the commission elected on platforms of controlling growth, concern within the business community has been clear.

Around 100 single family dwelling building permits have been issued since July 1, bringing the total for the first three quarters of 2021 to around 270 permits. That’s up from the roughly 200 permits issued during 2020, according to county records.

Most of the major projects are being built in Minden and Sundridge, where Valley Knolls is under construction, but construction is visible across the Valley. Combined with traffic congestion, that has provided fuel for residents concerned the county is overbuilding.

Put in place in 2007 after approval of the Sustainable Growth Initiative in 2002 and five years of lengthy legal wrangling, the growth ordinance called for a 2 percent growth cap.

According to the 2020 Census, Douglas County has seen a population increase of 2,491 people to 49,488 residents over the course of a decade.

The Census was taken in April 2020 as the current building boom was taking off.

Driven by high demand, but hampered by high construction costs and a shortage of skilled labor, in addition to political opposition, building accounts for nearly a tenth of the county’s workforce, Gordon said.

According to Gordon, the direct impact is the loss of $125 million a year that is supported by residential construction activity.

While more houses are being constructed, the number of people occupying those homes is decreasing. When the growth management ordinance was enacted, the population for a single home was estimated by the Census at 2.5 people.

He said that while Nevada will continue to be one of the fastest growing states in the union, that’s not carrying over into Douglas County.

The county’s population has been aging with residents 60 or older going from 29 percent to 40 percent and a median age rising from 47 to 52 years.

Enrollment at Douglas County’s public schools has decreased by nearly a fifth over the last decade as retirees arrive without their children. That’s reducing the number of people per household.

Not only water concerns should slow the growth down but our failing road infrastructure that is out dated and in need of repairs and more thorough ways. The congestion in the valley has become horrendous. The amount of speeders and overall lack of care for others on the road ways as well is getting worse. On average when driving I experience at least several road rage incidents every time or at least witness to others. It’s getting really bad out there.

It's about time they woke up about growth & water concerns, sure doesn't take a genius to figure that out.