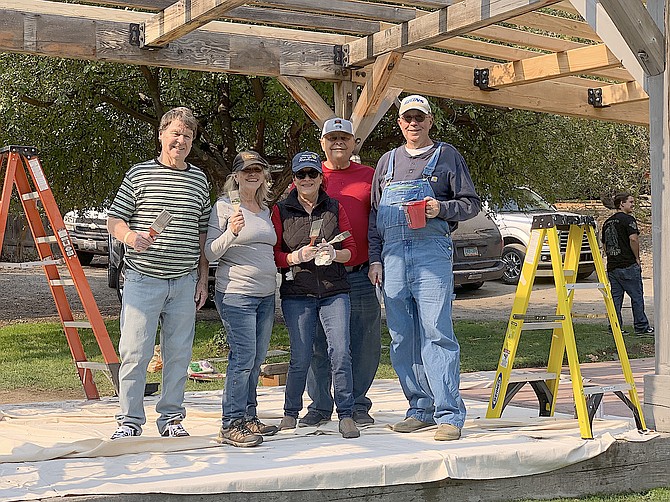 Friends of Genoa (through generous donations), Minden Rotary Club, and Genoa Co. have collaborated to refurbish the Genoa Bandstand. Here members of the Rotary Club take a break for a photo while staining the bandstand the week before Candy Dance.

Genoa, Nev. — A request for a tentative commercial subdivision map at Buckeye Road and Muller Lane goes before the Water Conveyance Committee at their 4 p.m. meeting at the Minden Inn today. Find out more at www.douglascountynv.gov and click on meetings and agendas.

Containment on both the Caldor and Dixie fires have hit the low 90s. The Dixie Fire containment date has been delayed to the end of October, while Caldor is pinned at Oct. 16 as of this morning. The two fires within 100 miles of Carson Valley consumed 1.18 million acres between them and have cost $856 million to fight so far.

There is still some heat coming off the Caldor Fire in the Alligator’s mouth northwest of Caples Lake. It looks like it’s burning into the island west of there toward Convict Meadow. Everything else is well within the fire’s perimeter.

We had a little wildfire down at Jack Wright Pass around lunchtime on Saturday reportedly started by shooting. The folks reporting the fire sounded like they were properly equipped and were able to get it mostly out. Firefighters mopped up the fire, which was reported around 11:50 a.m.

Douglas County merchants saw taxable sales flatten out for the first month of the 2021-22 fiscal year showing a decrease of .6 percent to bring in $89.2 million. The big categories, like general merchandise stores and food services and drinking places came in strong. There were a lot of not so healthy sectors like merchant wholesalers of durable goods that brought in a third of July 2020’s $15.6 million.

Longtime Douglas County Planning Commissioner JoEtta Brown, who suffered a stroke last month, has been transferred to Alta Skilled Nursing and Rehabilitation Center at 555 Hammill Lane, Reno, NV 89511. She is in Room 603, Bed 1. If you're sending a card, her address should be Attn: JoEtta Brown, Room 603, Bed 1 under Alta Skilled Nursing and Rehabilitation Center.

It will be another hazy day thanks to smoke from the fires down near Sequoia National Park. We’re heading into a cooler and possibly wetter weather pattern with showers entering the forecast on Wednesday. Expect a high of 81 degrees today with wind 5-10 mph out of the west, gusting to 20 mph.