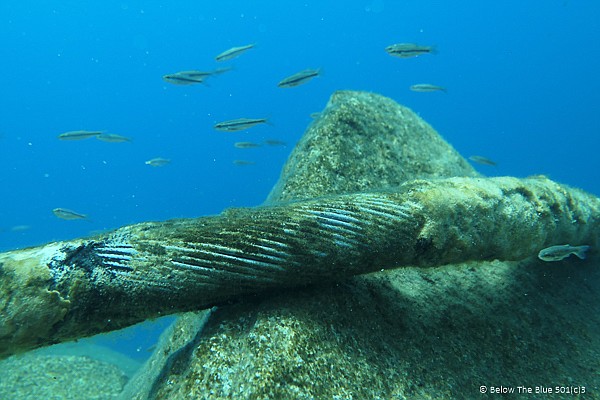 Insulation has worn off phone cable located under Lake Tahoe.

Eight miles of abandoned telephone cable laid off the west shore of Lake Tahoe were ordered removed under a settlement, according to a federal court decree.

Pac Bell stopped using the cables in the 1980s. In a suit filed by California Sportfishing Protection Alliance, the cables are leaching lead into the Lake.

Besides concerns over the lead in fish, the Lake is a source of drinking water for residents living along its shores.

The nonprofit sued in federal court at the beginning of the year, but were able to come to a settlement where Pac Bell would provide $1.5 million to remove the cables from the Lake.

Under the agreement, the company will remove the cables within 90 days of receiving authorization. Pac Bell isn’t admitting any liability, and should the deal fail to be consummated, the lawsuit would be reinstated.

The cable estimated to weigh 75 tons and was discovered in 2020 by divers Seth Jones and Monique Rydel Fortner. Its discovery prompted the founding of Below the Blue, a nonprofit that removes debris from the Lake.

AT&T purchased Pacific Bell and plans to remove the cable by next year.

The cables stretch from Baldwin Bay across the mouth of Emerald Bay to Rubicon Bay. The cables could date back to as early as the 1930s. According to Beyond the Blue, the cable conservatively contains more than 60 tons.

“Now that the risks of such contamination are known, it is unfathomable to continue exposing Lake Tahoe’s residents and millions of visitors to potential harm,” Jones said.