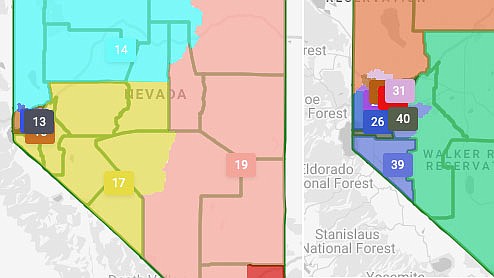 The proposed Nevada Senate District 17, left, will expand east to include parts of Nye and Lander counties, in addition to Esmeralda, Mineral, Churchill and Lyon counties. Assembly District 39 will continue to include Douglas and western Lyon County.

Under redistricting proposed by Democrats in the Legislature, Sen. James Settelmeyer’s District 17 will expand to include Douglas, Churchill, Lyon, Mineral and Esmeralda and a chunk of Lander and northern Nye counties.

The term-limited senator’s district will no longer include Storey County.

Those maps are unlikely to change much when the special session comes this month, but before the year ends, since Democrats hold majorities in both the Senate and Assembly.

They resisted the temptation to increase the number of lawmakers, sticking with 21 senators and 42 Assembly members.

For the Carson City, Douglas and Storey districts, the changes don’t appear to be dramatic.

Republican Jim Wheeler said he is seeking Settelmeyer’s seat in the Nevada Senate.

Wheeler’s Assembly District 39 will continue to represent Douglas and parts of Lyon.

The other multi-county Congressional District is CD4 currently held by Democrat Steven Horsford. It includes the bottom end of Lyon, Mineral, Esmeralda, Nye, Lincoln and part of Clark counties.

The other two congressional districts are both entirely within Clark County. They are represented by Democrats Dina Titus and Suzie Lee.

And like the current maps, Lyon County remains the only county divided between districts with the northern portion in CD2 and the southern in CD4.

The maps can be viewed at https://redistricting.leg.state.nv.us/legdistricting/nevada/comment_links