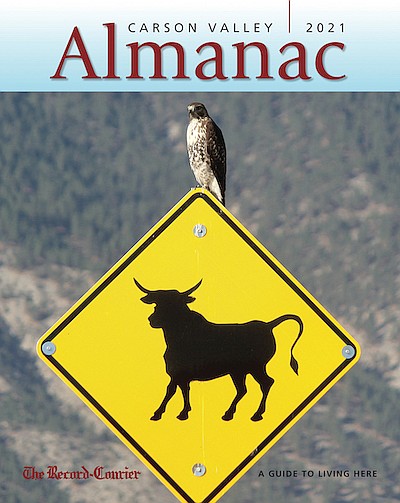 Thank you to all the talented writers and photographers for the 2021 Carson Valley Almanac. Your whimsical local cover makes a fitting coffee table magazine for summer visitors. Good to see bird expert Linda Hiller’s included article, too.

I had the privilege of touring East Fork Fire Station 14 and Douglas County Judicial and Law Enforcement Center and Jail last week as a member of Leadership Douglas County. It was by far one of the most interesting and educational experiences I have had as a long time Douglas County resident.

I have always respected the efforts of these agencies, but to be able to have a behind the scenes look into their work and the opportunity to hear from and speak to the men and women of these agencies was enlightening. The passion and dedication to the job and to our community was amazing to see from every person we encountered. Listening to the amount of training, preparedness and commitment to each other and to those they respond to was heartwarming. I truly felt I had a better sense of knowledge about what our first responders do to make sure they keep us safe and confident they can take care of any call they encounter.

There is so much more that goes into keeping our community a safe place and as a community member I truly did not realize the scope of what that takes from these organizations. There is more than just showing up to take a call for these first responders, they are people just like all of us who serve this community and want it to be the best it can be. I feel safer knowing what goes into the work they do and having been able to see a majority of it firsthand, I am very impressed.

Thank you DCSO, East Fork Fire and our Courthouse and Courtroom judges and staff for your efforts, for taking the time with Leadership Douglas County and for your commitment to the safety and bettering of our community.

How are businesses supposed to grow?

“I can’t support any business that puts profits over people.” Thus began a very short debate regarding economic systems and their purpose.

Why is a business in business in the first place? It’s all about profit and loss. The key to success of capitalism over its rivals (socialism and communism) is the fact that businesses are “profit driven.” How is a business expected to be successful if not for making a profit? How is it supposed to grow and expand its workforce? How is it expected to pay taxes? There is greed in all economic models, the big difference is that in capitalism a larger percentage of the populace is enabled to be “greedy” (i.e. make as much as they want through hard work and sacrifice).

Make no mistake, there is a price to pay for making money and I’m not one of those who believe our sole purpose here on Earth is to amass a fortune. I would suggest the reader take 45 minutes or so and listen to the interview of Nobel Laureate Economist Milton Friedman taped on the Phil Donahue show in 1979. The points made are just as valid today as they were then.

This just in from Venus

In his letter of May 20, Mr. Clark informs us that the shooting of sporting clays does not happen within earshot of the Inn. He then adds a dig at you, Mr. Editor, for not checking the accuracy of submittals.

This reminds me of a kerfuffle that developed after another letter I had published elsewhere over 20 years ago. Coincidentally, NASA was the subject of that letter too.

In it, I described NASA's plan to send Elian Gonzalez back to Cuba in style, using a large purpose-built catapult. I described in great detail how the lad would be insulated to survive the portion of the 90-mile trip that would take him into the bitterly cold stratosphere which no one, regardless of refugee status, could survive unshielded. I also described the streamers and parachute that would deploy during his descent to land him gently in the geographic center of Havana, plus or minus one half mile (the winds, you know). In the plan, he would throw candies to the assembled crowds as he floated down, and then he would be dandled on the knee of then-presidente Fidel Castro.

This letter sparked a number of heated responses about a passage which had Elian enjoying enchiladas during the salsa music-infused fiesta leading up to his launch. Irate readers protested that the foods I described were Mexican fare, not Cuban. This seemed wrong-headed to me on two counts: 1) people of all cultures, including myself — a descendant of English and Irish persons — might enjoy an enchilada; and 2) the obviously fictional catapult ought to have been the focus of any complaints of inaccuracy.

It is amazing what massive lies you can smuggle in behind the smokescreen of minor fibs concerning culture or geography.

As for my most recent letter, allow me to state that I unreservedly apologize for misstating the noise impact of sporting clays at the Inn, and while I do not apologize for this much larger fiction I also state categorically that I do not live on Mars.

I moved to Venus, which is not on Tanya Tucker's tour calendar and where no one is currently sending helicopters.

Venus (formerly of Jezero Crater, Mars, and even more formerly of Gardnerville)