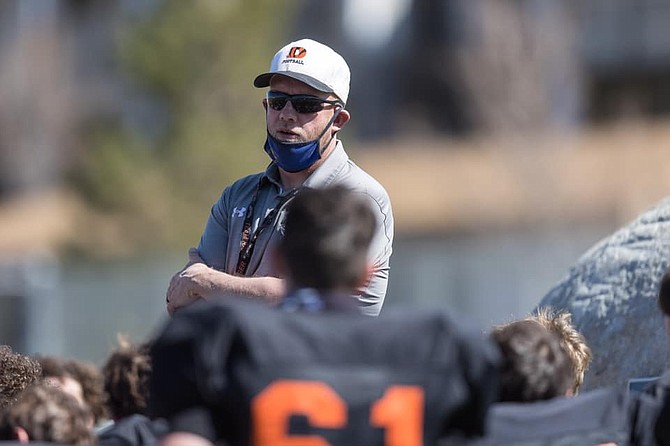 Kyle Mays talks to his players Photo by Ron Harpin.

Douglas High School officially hired Kyle Mays to be the new head football coach for the Tigers.
Mays most recently served as Douglas’ freshman football coach for four seasons before his promotion Friday afternoon.
The hire comes just about two months after nine-year head coach Ernie Monfiletto retired from his post in early April.
Mays graduated from Douglas High School in 1999, playing football all four years in high school.
“When I say played, I mean loosely because I wasn’t very good,” said Mays.
After graduating high school, Mays went into the military before coming back and getting his degree in education.
Mays spent four years at Reno High as an assistant and two years at Damonte Ranch before moving back to Minden with his wife, who is also a Douglas High graduate.
He first started as an assistant with the Tiger program in 2012.
“Kyle, he’s been a part of the program for some time now. He most recently served as our head freshman coach. Some of the strength he brings … he is dedicated to the kids, organized and builds strong relationships with kids and people,” said Douglas athletic director Marc Walling. “I know that we have had a lot of consistency at the helm and we are excited that Kyle is the next guy to get in charge.”
Prior to Monfiletto, Douglas High football had two longtime coaches in Mike Rippee and Bill Coverley serve in consecutive roles, dating back to 1970.
“I just wanted to continue the same traditions since coach Coverley,” said Mays. “Doing our best to raise young men and represent the school and our families to the best of our ability.
“I think above all else my passion for Douglas football. I can never say this enough about the coaches that coached me, the Monfiletto’s and the Rippee’s of the world, just tremendous men,” said Mays. “I hope I can live up to what they’ve done.”