Douglas will play at Reed Wednesday 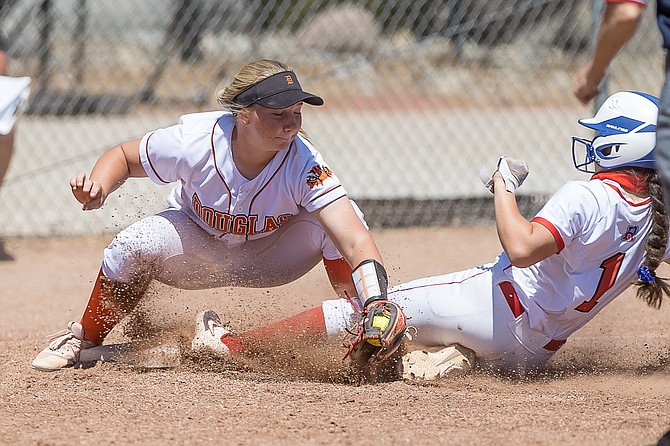 Douglas High's Emma Glover makes a tag out at third base during a contest against Reno earlier this season. Glover and the Tigers bested Reno to open regional play Tuesday. Photo by Ron Harpin.

Douglas put together nine of its 12 runs in the third inning Tuesday.
Mehaila Pete singled in the first run before Talia Tretton knocked in two more.
Following a Ryleigh Blaire RBI single Crystal Bennett doubled, scoring Anna Northcutt and Ashley Delaney.
Ultimately, Tretton and Bennett finished with three RBIs apiece.
Alyonna Pretty On Top homered to lead off the second inning and also drove in three runs for the Tigers.
Tretton and Mackenzie Willis combined to strike out 10 Husky hitters over five innings of work.