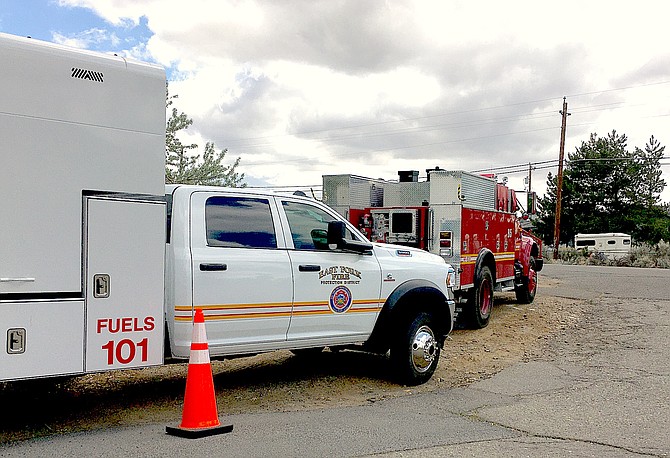 The East Fork Fuels Crew was at work on Sunday clearing brush from around power poles along Jacks Valley Road. NV Energy is funding the crew, which will also be available to help fight wildfires in the Valley. Photo by Kurt Hildebrand.

Genoa, Nev. — There’s actually snow for Minden in the forecast for Wednesday night and Thursday morning. I doubt we’ll see any powder in Carson Valley, but the overnight low of 29 degrees on Thursday is a real possibility as we head into the downhill side of May.

Fish Springs received .62 inches of rain over five hours on Sunday, according to a gauge at the volunteer fire department. Almost half of that fell in the first hour between 1:50 and 2:50 p.m.

The storm focused in the southern and eastern part of the Carson Valley with the Gardnerville Ranchos reporting .12 inches and half that falling at Minden-Tahoe Airport and .05 inches in Johnson Lane.

Someone from the Johnson Lane area reported seeing a lightning strike and ignition across the Valley near the base of Genoa Peak. Firefighters responded, but didn’t find it. That doesn’t mean there isn’t something smoldering in the hills. There were a lot of lightning strikes on Sunday.

The lightning coincided with at least two separate power outages in the Valley’s eastern parts, including one at 3:10 p.m. that affected 179 NV Energy customers and another at 7:50 p.m. affecting 39. According to NVEnergy.com all power has been restored this morning.

Firefighters responded to a call of a transformer hit by lightning in Topaz Ranch Estates during the storm. They said it was arcing a bit, but there were no wires down and no fire. Forest Service firefighters doused a tenth-acre fire along Burnside Road in Hope Valley near Hawkins Creek on Sunday morning.

Today’s forecast is for sunny skies and a high temperature near 79 degrees and the wind out of the west at 10-15 mph, gusting to 30 mph.