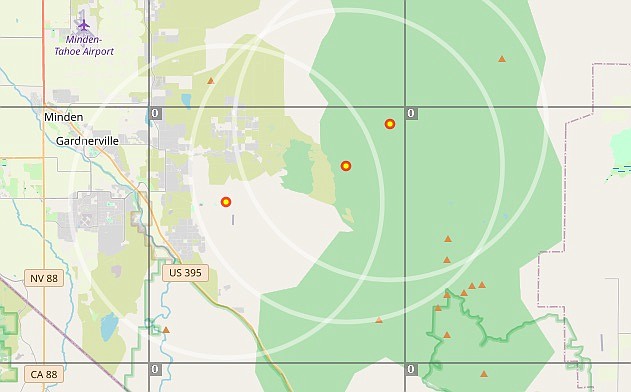 A thunderstorm moving southwest into Carson Valley saw three lightning strikes within seconds of one another at about 2:38 p.m. Sunday.

One strike came down east of the Douglas County Transfer Station. The other two were in the Pine Nuts above Fish Springs.

On the other side of the Valley, two strikes hit near Jobs Peak, according to lightningmaps.org

The camera at http://www.alertwildfire.org/blmnv/?camera=Axis-RidgeTahoe doesn't show any smoke plumes from the strikes.

Anyone outside should get into a vehicle or find the lowest area possible, forecasters said.

Thunderstorms bring the possibility of heavy rain, hail, dangerous lightning as well as gusty outflow winds. Gusts of 35-55 mph are possible near storms.

This comment was removed by the site staff for violation of the usage agreement.