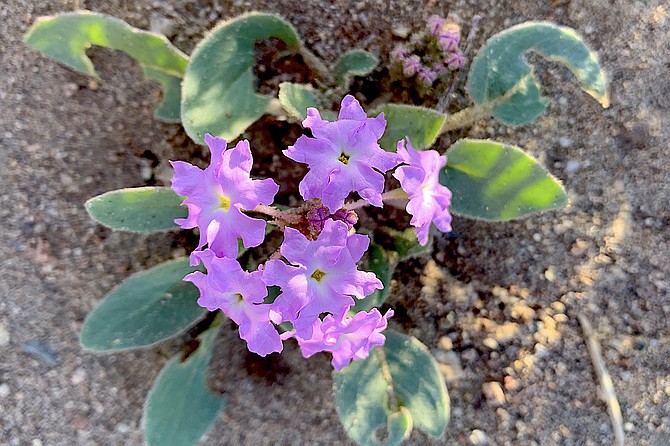 A wildflower blooms in the Pine Nut Mountains in this photo taken by Johnson Lane resident Pat Stanley.

Under the agenda item, the town could reject all three candidates, pick two for a subsequent interview, or select one for a conditional offer. Once the board has made a decision, Human Resources would vet the candidate and start negotiations.

I got word on Friday that the only person I’m aware was charged in connection with the Aug. 8, 2020, #Black Lives Matter protest and counterprotest was convicted and sentenced to serve weekends in jail. No one was injured in the incident which reportedly involved the man driving his pickup into protesters. I’ll have more on this later today.

According to weather watcher Don McRoberts, the April 14 snowstorm in Johnson Lane left .55 inches of moisture, which is fueling a bloom in the Pine Nuts. The snow also knocked down the cheat grass, which might slow down the fire danger for a bit.

Expect sunny skies and a high of 73 degrees today as temperatures warm up after the weekend’s cool spell. The wind will be out of the north at 5-10 mph. Minden could see 85 degrees by Thursday.