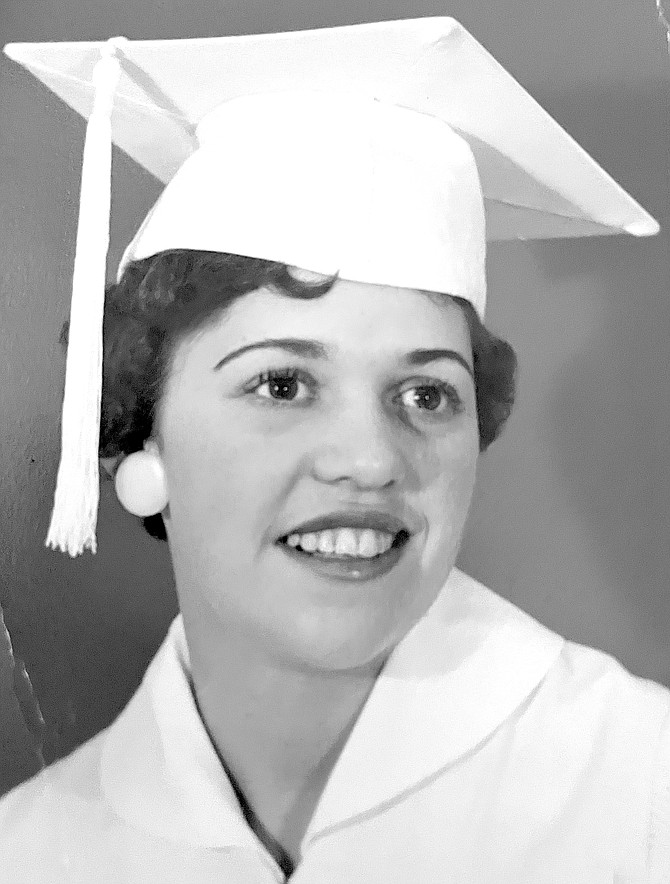 Betty Downs in her graduation robes

This is a story of a 12-year-old girl, who was living her life in Manhattan Beach, Calif. Afternoons would be spent going to the beach and enjoying the ocean which was only a few hundred yards away. In a home where Betty Downs enjoyed her own room, electricity and friends. Until her parents decided to become homesteaders here in Johnson Lane. I am going to present it in her own words, perhaps with an addition from the archives.

In 1953, Mom, Dad, Kenneth and I lived in Manhattan Beach, Calif. (Mom is Bessie Downs and Dad is Walter Downs Sr.). We had a nice house along the strand and it was only about 200 yards from the

beach. Kenneth and I spent quite a bit of time there when we weren't in school, swimming and playing in the ocean.

My brother, Walt, who lived in Bishop, Calif., called my Dad one night and told him about some homestead land that was available in Nevada. A good friend of Walt's had checked it all out and said it

I think in the spring of 1953, Mom, Dad, Kenneth and I drove to Bishop. Loretta (Sister) was living with Walt, Mary took care of the four of us kids while Mom, Dad, Mary and Walt drove to Carson City.

They found the land that was included in the Homestead Act (Johnson Lane area), and each family filed on 160 acres for 10 cents an acre or $16.

In late summer of 1954, we moved from Manhattan Beach to Carson City. We lived in a motel and Kenneth and I started school in Carson. I was in 7th grade and Kenneth was a freshman. After a week or

two we moved out to Johnson Lane and Dad enrolled us in the Douglas County School System.

A little side note, my first day of school in Minden, I carried a sack lunch and placed it in the cloakroom.

When I went to lunch, I was sitting all by myself at a table in the lunchroom, when I reached into the sack there was a note on the top of my sandwich that said, “I love you.”

I guess that was better than “I hate you.” I was so embarrassed and I kind of looked around to see if anyone was looking at me. I never found out who placed the note in my sack.

The house we moved into was made out of ammunition crates; it had a living room, a bedroom and a kitchen. No running water, no electricity, and an outhouse in the back. I slept with Mom in the living room, Kenneth and Dad in the bedroom. We had a wood stove to cook on, and to heat water, and an ice box that truly used a block of ice. We had to haul our water from a windmill about two miles away in milk cans. The wood stove in the kitchen was the only heat we had. We took our baths in a No. 2 washtub in the kitchen with water heated on the woodstove. This all was quite a culture shock to a 12-year-old girl, who had so far lived her life with all the amenities of electricity, paved roads, inside bathroom, her own bedroom, regular stove, refrigerator, heated house and a black and white TV.

Of course, there weren't any paved roads at all in Johnson Lane until you go to the cattle guard at the intersection of Johnson Lane and Heybourne Lane.

We caught the bus right at the cattle guard and some mornings had to build a fire to keep warm if it was going to be a long wait.

In school we were not the most popular kids because first, we were from California and second, we had homesteads on land that the community thought belonged to Dangberg and Dressler families because their cattle grazed out on Johnson Lane.

In the winter, Johnson Lane was always so muddy, and full of alkaline, that it seemed like we got stuck at

least once a day.

My dad was hurt Dec. 9, 1954. He was an electrician and was in the union in California. Because Nevada was a "Right to Work" state he could not find work as an electrician. He went to work just outside Carson in a Gypsum fertilizer plant. It had started snowing and he slipped and his arm went through a conveyor belt. There was an elderly gentleman there and instead of cutting the belt he backed my dad's arm back through. Most of the bones in his right arm were crushed. He was 53 years old at the time, so he had a hard time healing. First, they thought they were going to have to amputate his arm, but decided against it and tried to save it, if possible. He would go back into the hospital two or three more times as they tried different things so he could use his arm.

Needless to say, there was not much money coming in. Mom and I cleaned motel rooms in Carson and Kenneth would drive us even thought he didn't have a driver's license. I also worked in the cafeteria at the school so I could get my lunch each day.

Then our car was repossessed because we could not make the payments. This was before any kind of

assistance programs or credit cards, so if you didn't have cash or some money in the bank, you just did

Just before Christmas, one of Mom's brothers died of cancer. My sister, Loretta, gave us some money so Mom and I could take a Greyhound bus to go to L.A. for my uncle's funeral. Kenneth stayed with Dad.

This is first of three chapters to Betty's story of Johnson Lane. As you can see life here in the beginning was difficult to say the least. We owe these first homesteaders a huge thank you for stepping up to the challenge and establishing this neighborhood we all love. This is my way of showing that appreciation.

Join us in the next journal where Betty expands on her experience of growing up in Johnson Lane.