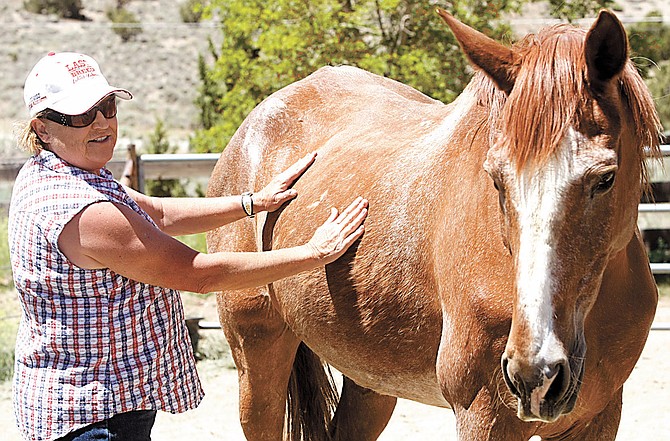 Born May 26, 1954, to Clyde and Peggy Pearson in Bishop, Calif., she became the 32nd person to live year around in Mammoth.

She and the family operated Hilton Creek Pack Station, carving several of the roads in the area. She was one of 15 graduates from Lee Vining High School, where she was a cheerleader.

She moved to Fayetteville, Ark., to help her brother run multiple night clubs, her daughter Courtney said. She returned to the Sierra and became a rancher’s wife before moving to southern Douglas County. She moved to Fish Springs, where R-C Staff Writer Sheila Gardner interviewed Kemp for a 2008 story about the horses she dubbed Hope and Courage.

Kemp’s brother spotted the horses staggering along the road on May 20.

Cis, Hope and Courage appeared in several issues of The R-C, including a letter publically thanking Cis for her efforts.

Residents and businesses contributed to the care of the horses.

Hope and Courage lived out their lives with their adopters, who would take them on short trail rides and walk them through the mountains, Courtney said.

Kemp brought the same level of care to people as a caregiver with certifications in Alzheimer’s and dementia.