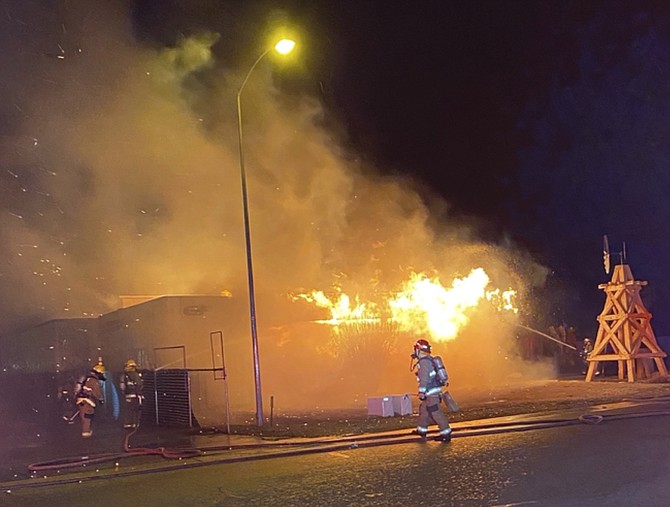 East Fork Firefighters responded to the 3 a.m. call on Industrial Way, where flames were being fanned by 30-40 mph winds.

First responders found that the inside of the main building was ablaze with heavy smoke and was threatening to spread downwind to the rest of Industrial Way.

In all, 32 firefighters mustered to suppress the fire with East Fork logistics volunteers providing support.

Firefighters from Truckee Meadows and Mono County helped cover stations along the edges of the district, as did Tahoe Douglas.

“Commercial fires will always present additional challenges that we don’t see in residential type fires,” East Fork Chief Tod Carlini said. “Adding the wind and weather conditions that were encountered at this fire made the effort even more incredible.”

Firefighters were able to limit the blaze to the building and prevented its spread.

The cause of the fire is under investigation, Valenzuela said.

Carlini offered his thanks to the agencies that provided mutual aid and those who sent resources to staff East Fork stations during the fire.

A weather station south of Genoa recorded a 66 mph wind gust at 2:40 a.m., according to the National Weather Service.