Highway 395 a dangerous stretch through Pinenuts 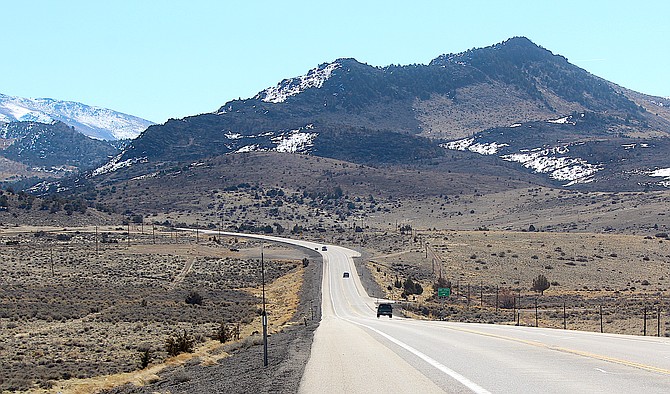 Highway 395 looking south from near the top of Jake's Hill on Thursday. Photo by Kurt Hildebrand.

It has been almost 30 years to the day since Bodie Flat residents gathered signatures on a petition in 1991 to try and get a safer school bus stop at Courtland and Highway 395.

Last week, a longtime resident was killed while waiting to make a left turn onto into the Pinenut neighborhood when a semi struck him from behind.

The Nevada Highway Patrol said a southbound Freightliner failed to stop, striking the rear of Sean Leonard’s pickup, and forcing it into the path of a northbound utility truck.

The intersection isn’t very visible to northbound traffic, but motorists traveling south can see the entire valley spread out from the top of Jake’s Hill south of Gardnerville.

The Nevada Highway Patrol’s Multi-Disciplinary Investigation and Reconstruction Team is investigating the cause of the collision, but there’s little evidence that the 18-wheeler saw Leonard’s pickup before it was struck.

“I cannot tell you how many times people tried to pass illegally in that spot, and many times they are speeding,” she said in a letter to Douglas County commissioners last week.

She said she drives to Courtland Lane twice a day to feed her horse.

“There is no room to pass a car stopped their to turn on the right because of poles to the west of the highway, and so we often pull over and wait for traffic to clear,” she said.

Smith-Fillmore suggested some signage might be helpful. There is no turn lane at the location unlike Ray May Way further up the hill.

Highway 395 is part of the federal highway system and is under the jurisdiction of the state.

About 9,450 vehicles a day travel through the Pinenuts on Highway 395. Only about 2,100 of those vehicles come from residents.

The stretch of Highway 395 through the Pine Nuts has long been considered one of the more dangerous routes through Douglas County.

While there have been fewer fatal collisions on the highway in recent years, it has been the scene of around two-dozen fatalities over the past 30 years.

Several of those were the result of someone crossing the centerline either due to inattention or trying to pass.

Collisions on the highway don’t just cost lives. In the winter, when Monitor Pass is closed, the only other detour goes through Yerington and Silver Springs.

Last week motorists mostly waited the six hours until the road was reopened.

A Sean Leonard Memorial Fund has been opened at Eldorado Savings Bank. There is also a GoFundMe account at https://gofund.me/1a62636a

• It was the second time in under 18 hours that the highway was closed for a collision.

At 5:30 p.m. Feb. 22, two pickups were stopped at the red light at Riverview and Highway 395. When the light turned green, they both entered the intersection and were struck by a Suburban traveling southbound on Highway 395 that didn’t stop for the red light. Minor injuries were reported as a result.

• A 62-year-old Mammoth Lakes man succumbed to injuries he received in a collision in Smith Valley last weekend.

Mammoth Lakes Fire Department Capt. Lawrence Myrold died on Tuesday as a result of injuries received in the collision.

He missed the stop sign at Lower Colony Road and collided with a 1998 Dodge Ram pickup, causing the Dodge to overturn.

The crash is being investigated by the Nevada Highway Patrol Northern Command West Multi-Disciplinary Investigation and Reconstruction Team.