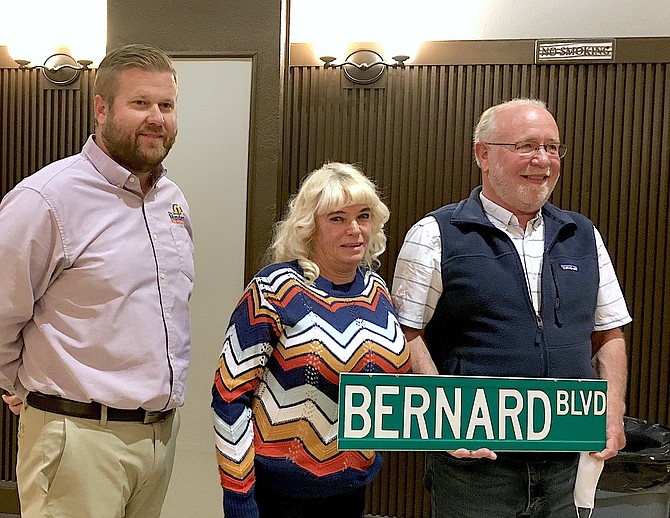 Minden Town Manager JD Frisby presents a street sign to Carol and Matt Bernard. Matt spent a decade on the town board before resigning his seat earlier this year. Biff Martel/Special to The R-C

Genoa, Nev. — An estimated $550,000 project that would install box culverts under Highway 88 between the East Fork and Cottonwood Slough in Minden goes before county commissioners today. Half of the cost will be reimbursed from a FEMA flood control grant and another $200,000 is coming from the state. Commissioners meet at 1 p.m. Visit douglascountynv.gov and click on agendas and meetings for instructions on how to participate.

Minden Town Board members approved a $2,500 a year contract to bring Hot August Nights to the town in August. The three-year contract hasn’t changed, but the approval is a sign that perhaps normalcy is on the other side of the outbreak. Minden’s also hoping its first event is the annual Carson Valley Days breakfast.

The town board voted to delay approval of a resolution that would set aside $500,000 over 10 years for Muller Lane Parkway. Construction of the Parkway is a county obligation, but is important to the town’s future plans.

Carson City Health and Human Services vaccinated 4,382 residents over the course of 10 days, officials reported on Tuesday. Of those 2,389 were second shots. We should start seeing the Johnson & Johnson single dose vaccine in the Silver State relatively soon. As of Wednesday night, Douglas has 443 active cases, 2,054 recoveries and 33 deaths.

March came in like a lamb, but forecasters are expecting a little more lion-like weather starting Friday night. According to a statement issued this morning, a Pacific storm is rolling in that might bring 4-6 inches of snow to the Sierra Crest. Some colder storms are expected to arrive next week.

Expect sunny skies with a high near 59 degrees today and winds out of the southwest at 5-10 mph this afternoon. As the front approaches it’ll be warm and breezy on Friday with gusty winds of up to 40 mph, so batten down the patio furniture.