Whether on land or lake, designate a driver 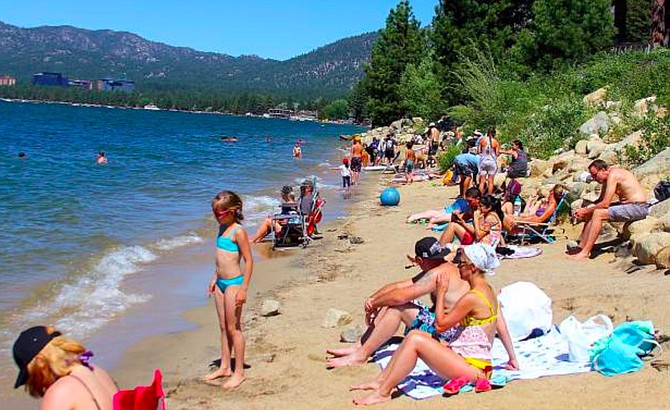 The beach at Lake Tahoe will be a popular place in the coming weeks, especially on Fourth of July.
Bill Rozak | Tahoe Daily Tribune

Whether on the water or the beach this Fourth of July weekend, local, state and federal authorities will be on the lookout for bad behavior and scofflaws.

Throughout the Stateline casino core area, Zephyr Cove and Nevada Beach, the Douglas County Sheriff’s Office and Nevada Highway Patrol will have increased patrol personnel on duty, as well as in Carson Valley, to handle calls for service and traffic enforcement, particularly targeting speeding and intoxicated drivers.

Patrol boats from all the jurisdictions surrounding Lake Tahoe, including Douglas County’s Marine 7, will be on the water this weekend.

“The July 4th weekend means an increase in boating activity on Nevada’s waters,” according to the Nevada Department of Wildlife. “Unfortunately, it also means an increase in drinking related accidents as well. That's why game wardens from the Nevada Department of Wildlife, along with law enforcement agencies from across the state, will be out in force this holiday weekend targeting boaters operating under the influence as part of Operation Dry Water.”

Open containers of alcohol are prohibited at Nevada Beach and are subject to confiscation for destruction and could result in a citation or arrest.

There are lots of ways to wind up in jail as a result of bad behavior over the holiday weekend.

“Incidents which will most likely result in an arrest or citation include acts that place celebrants or law enforcement officers in jeopardy; including fighting, theft, narcotic violations, severe public drunkenness, minors consuming or possessing alcohol, possession of or discharge of fireworks, or any other act that disrupts the ability to have a peaceful and safe environment for all,” Douglas County Sheriff’s officials said.

Many of the people deputies contact during the Fourth include those under the age of 21, who aren’t legal to imbibe any intoxicant.

The curfew in Douglas is midnight through the summer.

That goes for those operating vehicles on the water, too.

“Alcohol is the leading contributing factor in recreational boating deaths. It affects your judgment along with your balance, vision and reaction time,” said Bowles. “We definitely want people on the water enjoying themselves with their families, but we also want to make sure everyone gets home safely.”

Regardless of what someone has consumed, they are encouraged to catch a ride home with a sober driver.

“Don’t lose your independence on Independence Day, and don’t be a deadly risk to yourself and other innocent people,” Douglas Sheriff’s officials said.