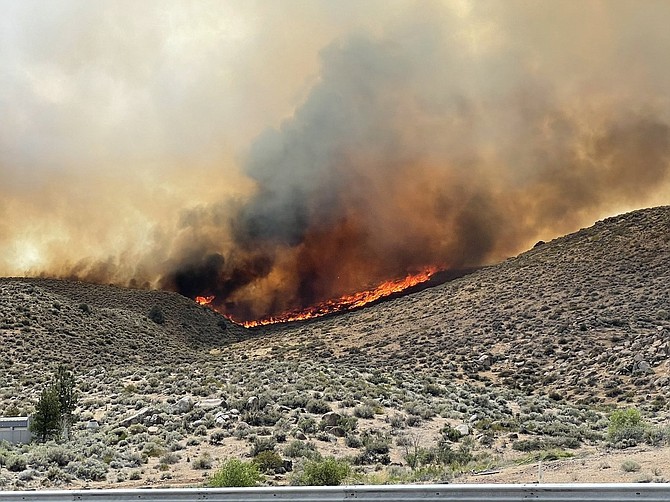 Flames from the fire burning north of Washoe Valley on Wednesday afternoon. The 300-acre Petrilla fire was the second medium sized blaze in the space of a week. Truckee Meadows Fire Protection District Photo

Thirteen East Fork firefighters responded to the 300-acre wildfire that closed both Interstate 580 and old Highway 395 northeast of Pleasant Valley on Wednesday.

Firefighters had a line around 35 percent of the Petrilla Fire in Steamboat as of 10 p.m. Wednesday.

The fire was first reported around 1:20 p.m. in short grass and brush.

“Mutual assistance within the region is critical to our effort in to combat wildfire,” East Fork Chief Tod Carlini said. “Truckee Meadows Fire was just one of the neighboring agencies that sent apparatus and personnel to our Jacks Valley Fire.”

Grass fires tend to burn hot, but quickly and there’s no sign of smoke this morning.

All roads in the area have reopened.

Firefighters are asking that motorists use caution traveling Old 395 in Pleasant Valley and near Wedge and the Mount Rose Highway as they are still working the blaze.