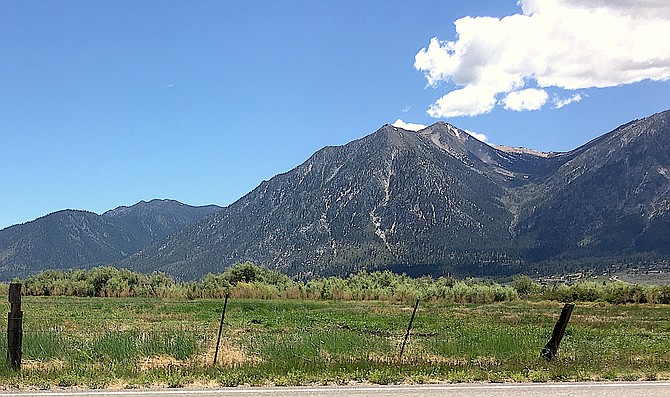 The last patches of snow cling to Jobs Peak on Saturday. By this weekend much of what's left of the Sierra snowpack may disappear under record high temperatures.
Photo by Kurt Hildebrand.

The National Weather Service in Reno has issued a heat advisory for 11 a.m. Thursday through 8 p.m. Friday as daytime temperatures are expected to hit 100 degrees or more.

“The combined heat and mild overnight lows will yield heat impacts to sensitive populations,” forecasters said, “(including) those exposed to the afternoon sun for long periods of time, and to those who do not have adequate home cooling.”

Minden is supposed to have mostly sunny skies with a high near 100 degrees Thursday, with the wind out of the west at 10-15 mph, gusting to 25 mph.

Friday’s high temperatures is forecast to hit 98 degrees, breezy with the wind out of the west at 15-20 mph, gusty to 30 mph.

Even after the heat wave expires, temperatures will remain in the upper 90s through the weekend before starting to retreat back to 90 degrees on Tuesday.

“It may appear a bit hazy due to high elevation smoke being transported northward from large fires in the southwest U.S. and northwest Mexico,” National Weather Service Reno Meteorologist Mark Deutschendorf said on Wednesday. “Saturday may be nearly as hot as Friday and may be considered for extending into the advisory.”

Forecasters said it is possible a few afternoon thunderstorms may develop Thursday and Friday.

“When dealing with heat of this magnitude, a few stray storms could pop up outside of the areas projected by the official forecast,” Deutschendorf said. “The main impact of any storm that develops will be strong outflow gusts of 50-plus mph due to high cloud bases and hot dry air mass at the surface. Isolated lightning-induced fire starts are also possible, while heavy rain and hail are less likely.”