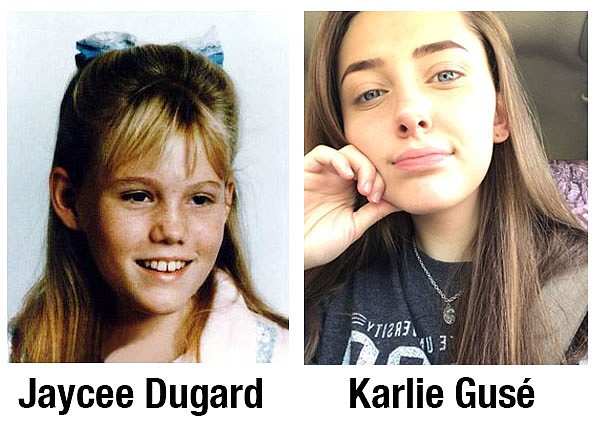 The kidnapping of then-11-year-old Jaycee Lee Dugard 30 years ago and that she was found alive 18 years later, offers hope for another missing California teenager who turned 19 last month.

Karlie Gusé disappeared Oct. 13, 2018, from her home in Chalfant in Mono County.

Unlike Dugard, Gusé left her home and was last seen walking toward Highway 6 on her own, according to the Mono County Sheriff’s Office.

June 10 marked 30 years since Dugard was kidnapped by a couple while she was waiting at the bus stop in South Lake Tahoe.

A gray sedan with a man and a woman grabbed Dugard and drove off, her stepfather told authorities.

Within days, volunteers were distributing fliers with Dugard’s picture and a sketch of the woman and a segment on “America’s Most Wanted,” but kidnappers Phillip and Nancy Garrido had already left the Tahoe Basin.

More than 18 years later, she was found in a compound constructed behind Garrido’s Antioch, Calif., home after a Berkeley Campus Police officer became suspicious of him while he was handing out fliers at the university in August 2009.

A background check revealed he was under lifetime supervision for a 1976 conviction for the rape and torture of a woman in Reno.

Garrido, Nancy, another woman and two girls arrived at the probation office. The woman turned out to be Dugard and the girls were her daughters by Garrido.

Parole officers had previously visited Garrido’s home but didn’t know that Dugard was being hidden with her daughters in the compound.

In the decade since Dugard and her daughters returned, she has written two books about the ordeal.

Gusé is a missing person and information about her disappearance is being sought by Mono County and the FBI.

Anyone who thinks they may have spotted Gusé can call the Mono County Sheriff’s Office Tipline at 760-932-5678, or email karliegusetips@monosheriff.org. They may also contact the Sacramento Office of the FBI at 916-746-7000, or you can submit a tip online at www.fbi.gov/tips.