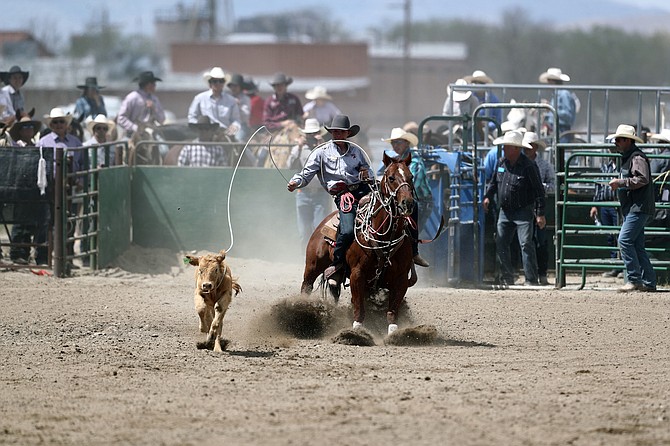 Colby Morian is going into his junior year at Douglas High and won first place in calf tying at the high school-level competition. His win secured him a spot on the State National High School rodeo team.

These national competitions are the two largest rodeo events in the world and include more than 1,650 competitors from 43 states, Australia, Canada, Mexico, and New Zealand.

Both Morian boys were drawn to rodeo pursuits around the age of 5. Their mom, Allison, used to ride her friends’ horses as a kid, and their dad, Nathan, showed cows as part of his 4H activities.

Colby got his first horse and joined 4H at age 6. He developed an interest in speed events and roping, and Andrew followed in his brother’s boot steps a couple years later. The family lived in Reno at the time, and the boys started taking roping lessons from Gardnerville native Michelle Howard.

Soon, Andrew was learning how to chute dog from the family’s next-door neighbor, Jason Kolvet, who also happened to be the father of Andrew’s best friend.

“We’ve just been blessed with so many people who showed us what we need to do and who’ve helped the boys along the way,” said Allison.

The family made the move to Gardnerville three years ago. Allison said they were drawn to the quality schools and the roping community in the Carson Valley, and she and Nathan felt the area was a better place to raise their sons.

Now, the boys’ training schedule consists of twice-weekly practices with Minden coach Austin Carrasco and occasional coaching sessions with Russell Funk of Smith Valley. On top of other responsibilities that include school and chores, they both practice daily.

“We ride when it’s light outside, do homework, then go to bed,” said Colby.

“Then wake up and repeat,” Allison said with a laugh.

The boys share an enthusiasm for rodeo and a love of their horses. Colby named his quarter horse, “Chicken Nugget,” in a nod to the horse’s stocky body type. Andrew rides “Sunny D,” also known as “Vanilla Gorilla."

“(He’s) a very big palomino,” Andrew said with a smile.

Colby said the family participates in 15-20 rodeos each year and traveling that amount with their animals helps foster a deep understanding between horse and rider.

“You get to know them, and they get to know you,” he said, noting the necessity of a rider having faith that their horse will know what to do during competition. “That’s why we practice so much."

“In normal rodeos, you have your game plan. State is a little nerve racking, and nationals is even more so. College and national rodeo scouts are there,” he said. “You see yourself on the jumbotron… all the people in the stands… the whole Nevada team cheering for you. It’s awesome to see but also nerve racking.”

Colby said loping in circles and warming up on his horse helps calm his nerves, and he can sense when Chicken Nugget is ready to go by the way he responds.

The past season and a half held its share of challenges for Colby due to horse injuries and a broken wrist he got while practicing. In spite of missing five rodeos this year, he was the only competitor at the state level to rope and tie all three calves in all three rounds, which earned him the top spot in that event. This is Colby’s first year competing at the national high school level.

In preparing to compete, Andrew said, “I’ll get nervous and then just go through my run in my head, think about what I need to do, take some deep breaths, and get ready to go. I have a calm horse and he helps me.”

Another strategy he employs is connecting with his roping partner, Eli, and talking over their plan together. Andrew said reviewing things beforehand helps to focus and settle them both.

Andrew was hopeful he and Eli could make it to nationals by being one of the top four roping teams, and the duo ended up securing the number one position in that event.

“I think this year (during state finals) that Drew and I kind of fed off of the excitement of each other doing well,” said Colby. “He won the first round, and I won the second round, and we ended up winning the whole thing (in our events). It was super-exciting all weekend.”

“To watch them do what they love is the best feeling in the world,” Allison said. “The ups and downs at state with the emotions… just because you want it so much for your own kids. There were a lot of highs and a lot of lows but thankfully, in the end, some pretty big highs.”

The family plans to make the most of their two trips to nationals this summer, caravanning with friends and fellow competitors. They’ll camp at various fairgrounds along the way and help break up the travel time by planning stops at several points of interest. Once there, the national rodeo events are full of fun activities such as mud volleyball and water wars, along with many opportunities to make new friends. The boys said that even though it’s a competitive environment, there’s lots of camaraderie and plenty of people willing to lend support and help each other out.

The Morian family will clock 6,000 miles on the road this summer, and a GoFundMe account was established to help offset the costs of attending the national competitions. Visit gofund.me/8fe1d669 for more information.