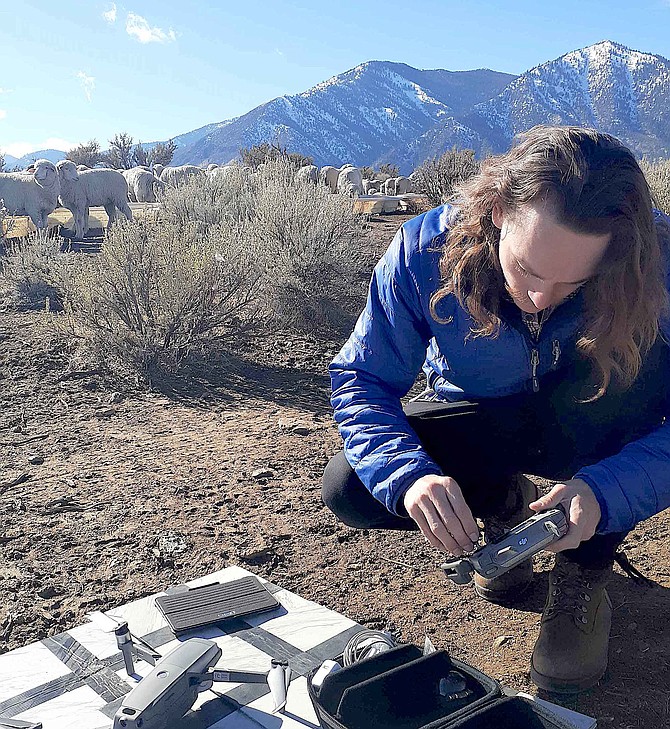 Rangeland Ecologist Joseph Domer prepares a drone to gather data from a pasture in Jacks Valley, where sheep are grazing. Tracy Shane | University of Nevada, Reno

A widespread problem on Nevada rangelands is frequent and large wildfires, often due to cheatgrass. Doctoral student Tracy Shane, with the University of Nevada, Reno College of Agriculture, Biotechnology & Natural Resources, recently began a project using cutting-edge technology to see how sheep and cattle grazing might help control cheatgrass.
Cheatgrass is an invasive species from Eurasia that spreads quickly and is extremely flammable. It also creates its own safe space to grow – the more dead cheatgrass and additional plant material left on the ground, the more easily cheatgrass establishes over time.
Barry Perryman, professor and chair of the College’s Department of Agriculture, Veterinary & Rangeland Sciences, previously collaborated with a team of faculty with the College’s Experiment Station and Extensionunits to study the impact of cattle grazing on cheatgrass during the fall, rather than in the spring, when cattle traditionally graze on the grass. The idea was that the fall grazing would help reduce the amount of dead plant material for the following fire season. Results from one study showed that in prescribed burn areas where some plots were grazed in the fall and some were not, land managers were unable to even get a fire to burn through the fall-grazed plots.
“Through fall targeted grazing, we can change the fuel characteristics of the cheatgrass-infested pasture, which reduces the probability that we get a wildfire and increases the chances of being able to control such a fire,” Perryman said. “It might even help save a life or some property.”
Shane’s new four-year project, funded by the U.S. Forest Service, allows the team to incorporate technology into the ongoing investigation. She is working with Perryman; Associate Professor Robert Washington-Allen, also with the department; Brad Schultz, Extension educator in Humboldt County; and Joseph Domer, rangeland ecologist and an alumnus of the College.
The team uses drones and terrestrial laser scanners to monitor and collect data before and after livestock graze. Terrestrial laser scanners are ground-based laser sensors that can scan vegetation in three dimensions, allowing researchers to see internal structural traits without having to damage the plants.
“Drones give us a good overhead view, and the terrestrial laser scanner helps us break through the shrub canopy and better understand the entire three-dimensional structure of the vegetation,” Shane said.
Last fall, the team monitored sheep grazing in Jacks Valley. Three other sites, Paradise Valley, in Humboldt County, and the Ruby Mountains and East Humboldt Mountains, both in Elko County, are currently under environmental review to prepare for the next part of the project. Cattle will begin grazing at these sites later this year.
Traditionally, researchers sample small patches of pasture and extrapolate the result out to pasture and full landscape levels. However, these extrapolations don’t account for landscape differences, such as changes in elevation, which means that the ecology and relationships observed at the small scale may be different on larger scales. By combining the drone data and the data from the terrestrial laser scanners, the team can see the change at a larger scale and account for those differences, allowing them to create more accurate prediction models for future rangeland management practices and fire fuel reduction.