Suspicious U-Haul turns out to be embezzled 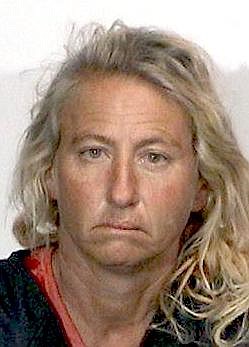 A woman was taken into custody after deputies found an embezzled U-Haul parked near Lakeside Drive on Tuesday.

Shundra Catalano, 41, was taken into custody after deputies learned from Fresno authorities the U-Haul was taken on May 9 and never returned.

During a search, deputies found a pipe, methamphetamine, a purse with someone else’s credit cards.

She told a deputy that someone else rented the U-Haul and that they said they would charge that person’s credit card to extend the rental.

However, a woman who said she helped Catalano rent the van said it was her impression she was trying to flee a man, who was taken into custody in Stateline the night before.

Christopher Wall was booked on charges of possession of a credit card without the owner’s consent and an outside warrant out of Lincoln County.

Catalano said that she and Wall had been living in the U-Haul.

According to the Nevada Department of Corrections, Catalano was convicted of two counts possession of a stolen credit card in 2004.

• A Holbrook man was arrested for DUI late Wednesday night after he was seen driving without headlights and failing to maintain his lane.

Leslie Streeter Richards, 56, was spotted northbound on Highway 395 from the Topaz Lodge in a Ford Taurus after dispatchers received a report of a possible drunken driver.

Richards was driving 35-40 mph over the hill to Holbrook and had trouble staying in the lane.

An injured leg prevented deputies from conducting a field sobriety test, but a preliminary breath test of .236 and an open bottle of whisky in the console resulted in his arrest. A background check revealed prior DUIs in 2015 and 2018. A third DUI in seven years is a felony in Nevada.

• A Reno man who had a gasoline bomb after being pulled over for driving erratically last October is scheduled to appear in court on Wednesday.

Bryce Irwin Gombert, 26, was arrested Oct. 10, 2020, after motorists reported that a PT Cruiser without plates was speeding through Minden and Gardnerville, and crossing into oncoming traffic, according to witnesses.

During the stop, Gombert told deputies someone was after him.

He was wearing body armor and had a mason jar full of gasoline and nails with a flare attached.

He is being represented by attorney David Houston.

• A woman was arrested inside a vehicle that had apparently been broken into in Stateline on Memorial Day.

Deputies responded to a car alarm going off in one of the casino parking garages and found Sarah Williams, 31, inside a 1998 Jeep.

The ignition had been punched out and there were two screwdrivers and a corkscrew inside the vehicle.

Williams said she’d lost the key and had to try to start the vehicle without it. A check on the vehicle found that it belonged to the mother-in-law of a Tahoe resident, who said no one should be in the vehicle.

• A Reno man waived his preliminary hearing on a felony of possession of a stun gun by a felon.

He is scheduled to appear in Douglas County District Court June 22.